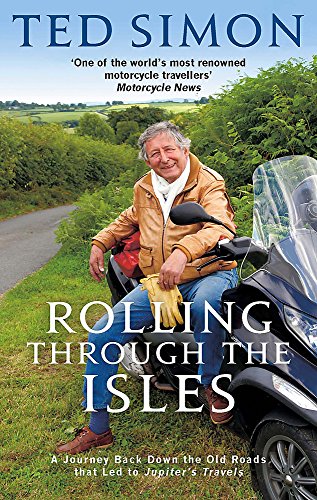 Rolling Through The Isles
by Ted Simon

In Stock
15,49 $
inc. GST
A wonderful and inspiring new travel adventure from the author of bestselling classic JUPITER'S TRAVELS
Very Good
Only 2 left

Rolling Through The Isles Summary

Rolling Through The Isles: A Journey Back Down the Roads that led to Jupiter by Ted Simon

From the bestselling author of Jupiter's Travels and Dreaming of Jupiter comes an entertaining and inspiring new journey round Britain.

Having crisscrossed the globe twice, Ted returns to the British Isles to rediscover the country of his youth. The result is a revealing portrait of modern Britain and a witty and affectionate journey back to the past, when Ted would hitchhike across the country visiting friends (and girlfriends).

He returns to the site of his old school with its astonishing war time history and visits familiar haunts where he did his National Service and got his first job in newspapers. He also visits less-familiar places. Some inspire him (Winchester Cathedral). Others defeat him (a tax office in Nottingham). As he rolls through the Isles, he discovers that a great deal has changed: busier roads, bureaucracy and, worst of all, the dreaded 'Sat Nav'. But there is also much to celebrate and enjoy along the way.

Packed with fascinating stories, extraordinary encounters and glorious depictions of the British countryside, Rolling through the Isles takes the reader on an unforgettable trip with a celebrated adventurer and writer.

Ted Simon was raised in London. He fell into journalism in Paris and later travelled round the world by motorbike for four years - a journey he chronicled in the classic Jupiter's Travels, which has sold over a million copies. He is the author of several other books including Dreaming of Jupiter, which documented his second journey round the world in 2001. He lives in Northern California.

GOR005440175
Rolling Through The Isles: A Journey Back Down the Roads that led to Jupiter by Ted Simon
Ted Simon
Used - Very Good
Paperback
Little, Brown Book Group
2013-08-01
256
034912261X
9780349122618
N/A
Book picture is for illustrative purposes only, actual binding, cover or edition may vary.
This is a used book - there is no escaping the fact it has been read by someone else and it will show signs of wear and previous use. Overall we expect it to be in very good condition, but if you are not entirely satisfied please get in touch with us.