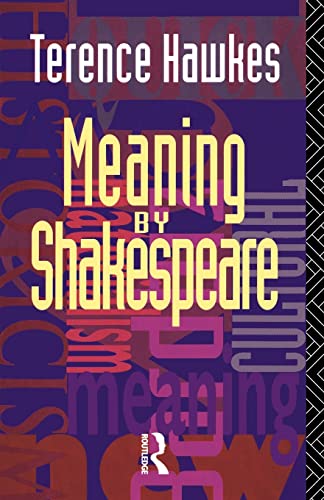 In Stock
$13.49
+10% GST
Terence Hawkes looks at King Lear, Measure for Measure, A Midsmmer Night's Dream and Coriolanus, as examples from this century of how Shakespeare's plays function as a language through which we generate meaning.
Very Good
5 in stock

We traditionally assume that the `meaning' of each of Shakespeares plays is bequeathed to it by the Bard. It is as if, to the information which used to be given in theatrical programmes, `Cigarettes by Abdullah, Costumes by Motley, Music by Mendelssohn', we should add `Meaning by Shakespeare'.
These essays rest on a different, almost opposite, principle. Developing the arguments of the same author's That Shakespearean Rag (1986), they put the case that Shakespeare's plays have no essential meanings, but function as resources which we use to generate meaning. A Midsummer Night's Dream, Measure for Measure, Coriolanus and King Lear, amongst other plays, are examined as concrete instances of the covert process whereby, in the twentieth century, Shakespeare doesn't mean: we mean by Shakespeare.
Meaning by Shakespeare concludes with `Bardbiz', a review of recent critical approaches to Shakespeare, which initiated a long-running debate (1990-1991) when it first appeared in The London Review of Books.

Terence Hawkes is Emeritus Professor of English at Cardiff University. He is the author of a number of books, including That Shakespherian Rag and Meaning By Shakespeare, and is General Editor of the Accents on Shakespeare series.

Acknowledgements 1. By 2. Or Shakespeare and the General Strike 3. Take me to your Leda 5. Slow, Slow, Quick, Quick, Slow 6. Lear's Maps 7. Bardbiz Notes Index