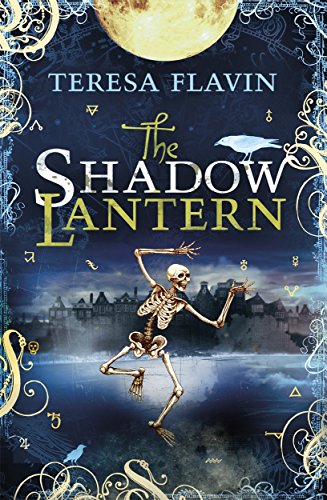 The Shadow Lantern
by Teresa Flavin

Used Price
$32,99
inc. GST
Free Shipping in Australia
When a mysterious old oil lantern and a box of painted slides appear at Blackhope Tower, Sunni and Blaise are drawn back to the place where their adventures first began.
Very Good

The Shadow Lantern by Teresa Flavin

When a mysterious old oil lantern and a box of painted slides appear at Blackhope Tower, Sunni and Blaise are drawn back to the place where their adventures first began. On discovering that the slides conceal secrets about artist-magician Fausto Corvo, the pair find themselves caught up in a deadly pursuit. An old enemy is still tracking Corvo and he will stop at nothing to find him. Sunni and Blaise must fight to protect Corvo's secrets and rid themselves of Soranzo's evil threat once and for all. The final instalment of the critically acclaimed timeslip adventure.

'this darkly supernatural mystery story will please many readers who love art and magic.' * Serendipity Reviews *
The Shadow Lantern (Templar, GBP6.99) brings to a satisfying conclusion Teresa Flavin's art world fantasy trilogy. Once again Sunni and Blaise return to Blackhope Tower where their involvement with Fausto Corvo began. On entering the magician's painted world they discover that, while much has changed, their enemy and his is still in pursuit. Teresa Flavin continues to display dexterity of mind and a lightness of touch as she resolves the many layers and facets of this unusual and engrossing trilogy. * The Scotsman *

Teresa Flavin's first novel, THE BLACKHOPE ENIGMA, was shortlisted for the 2011 Scottish Children's Book Award, the 2011 Leeds Book Award and the 2011 Waverton Good Reads Award, and longlisted for the 2011 Branford Boase Prize. When she is not writing or illustrating, Teresa leads school art workshops, makes paintings and handmade books, travels to far-flung places with her geographer husband, hikes in the Scottish hills and walks every labyrinth she can find. Follow Teresa at www.teresaflavin.com or on Twitter: @TeresaFlavin.

GOR005278849
The Shadow Lantern by Teresa Flavin
Teresa Flavin
Used - Very Good
Paperback
Templar Publishing
2013-05-01
271
1848779410
9781848779419
N/A
Book picture is for illustrative purposes only, actual binding, cover or edition may vary.
This is a used book - there is no escaping the fact it has been read by someone else and it will show signs of wear and previous use. Overall we expect it to be in very good condition, but if you are not entirely satisfied please get in touch with us.