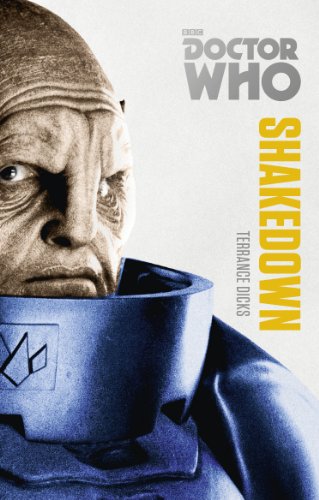 Doctor Who: Shakedown
by Terrance Dicks

Used Price
$20.49
inc. GST
Free Shipping in Australia
Now the Sontarans have a secret plan to destroy the Rutan race - a secret plan the Doctor is racing against time to uncover.

Only one Rutan spy knows the Sontarans' plan.

Doctor Who: Shakedown: The Monster Collection Edition by Terrance Dicks

Only one Rutan spy knows the Sontarans' plan. As he is chased through the galaxy in a desperate bid for his life, he reaches the planet Sentarion - where Professor Bernice Summerfield's research into the history of the Sontaran-Rutan war is turning into an explosive reality...

An adventure featuring the Seventh Doctor, as played by Sylvester McCoy

Terrance Dicks became Script Editor of Doctor Who in 1968, co-writing Patrick Troughton's classic final serial, The War Games, and editing the show throughout the entire Jon Pertwee era to 1974. He wrote many iconic episodes and serials for the show after, including Tom Baker's first episode as the Fourth Doctor, Robot; Horror at Fang Rock in 1977; State of Decay in 1980; and the 20th anniversary special, The Five Doctors in 1983. Terrance novelised over sixty of the original Doctor Who stories for Target books, including classics like Doctor Who and the Abominable Snowmen and Doctor Who and the Auton Invasion, inspiring a generation of children to become readers and writers. He died in August 2019, only weeks before the publication of his final Doctor Who short story, 'Save Yourself', in The Target Storybook.

GOR005856465
Doctor Who: Shakedown: The Monster Collection Edition by Terrance Dicks
Terrance Dicks
Used - Very Good
Paperback
Ebury Publishing
2014-03-03
304
1849907668
9781849907668
N/A
Book picture is for illustrative purposes only, actual binding, cover or edition may vary.
This is a used book - there is no escaping the fact it has been read by someone else and it will show signs of wear and previous use. Overall we expect it to be in very good condition, but if you are not entirely satisfied please get in touch with us.