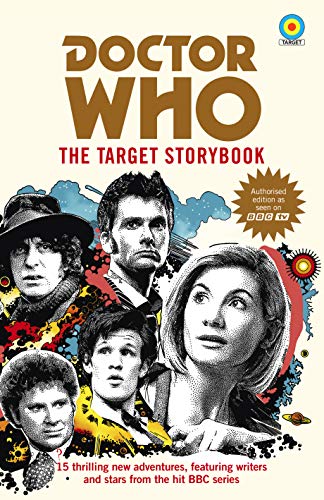 Doctor Who: The Target Storybook
by Terrance Dicks

We're all stories in the end...

In this exciting collection you'll find all-new stories spinning off from some of your favourite Doctor Who moments across the history of the series.

Doctor Who: The Target Storybook Summary

Doctor Who: The Target Storybook by Terrance Dicks

We're all stories in the end...

In this exciting collection you'll find all-new stories spinning off from some of your favourite Doctor Who moments across the history of the series. Learn what happened next, what went on before, and what occurred off-screen in an inventive selection of sequels, side-trips, foreshadowings and first-hand accounts - and look forward too, with a brand new adventure for the Thirteenth Doctor.

Each story expands in thrilling ways upon aspects of Doctor Who's enduring legend. With contributions from show luminaries past and present - including Colin Baker, Matthew Waterhouse, Vinay Patel, Joy Wilkinson and Terrance Dicks - The Target Storybook is a once-in-a-lifetime tour around the wonders of the Whoniverse.

Terrance Dicks became Script Editor of Doctor Who in 1968, co-writing Patrick Troughton's classic final serial, The War Games, and editing the show throughout the entire Jon Pertwee era to 1974. He wrote many iconic episodes and serials for the show after, including Tom Baker's first episode as the Fourth Doctor, Robot; Horror at Fang Rock in 1977; State of Decay in 1980; and the 20th anniversary special, The Five Doctors in 1983. Terrance novelised over sixty of the original Doctor Who stories for Target books, including classics like Doctor Who and the Abominable Snowmen and Doctor Who and the Auton Invasion, inspiring a generation of children to become readers and writers. He died in August 2019, only weeks before the publication of his final Doctor Who short story, 'Save Yourself', in The Target Storybook. Matthew Sweet presents the BBC radio programmes Free Thinking, Sound of Cinema and The Philosopher's Arms. He has judged the Costa Book Award, edited The Woman in White for Penguin Classics and was Series Consultant on the Showtime/Sky Atlantic series Penny Dreadful. His books include The West End Front and Operation Chaos: The Vietnam Deserters Who Fought the CIA, the Brainwashers and Themselves. Simon Guerrier is co-author of Doctor Who: The Women Who Lived and Whographica for BBC Books, and has written countless Doctor Who books, comics, audio plays and documentaries. He has been a guest on Front Row and The Infinite Monkey Cage on Radio 4 and, with his brother Thomas, makes films and documentaries - most recently Victorian Queens of Ancient Egypt for Radio 3. Colin Baker is an English actor who became known for playing Paul Merroney in the BBC drama series The Brothers from 1974 to 1976. He went on to play the sixth incarnation of the Doctor in the TV series Doctor Who. He reprised the role for the 1993 Children in Need special, Dimensions in Time, and the 1989 stage show Doctor Who - The Ultimate Adventure. He has also voiced the Doctor for over 140 Doctor Who audio stories for Big Finish Productions. Matthew Waterhouse played Adric, companion to Tom Baker and Peter Davison's Doctors from 1980 to 1982. Since then, he has worked extensively as an actor in theatre. His published writing includes a memoir, Blue Box Boy, three novels and a book of stories. Recently he's appeared in episodes of the audio version of Dark Shadows and numerous Doctor Who audio projects, including an award-winning one-man play, Doctor Who: A Full Life, and a forthcoming quartet of new adventures starring alongside Tom Baker. Jenny T. Colgan has written numerous bestselling novels as Jenny Colgan, which have sold over 2.5 million copies worldwide, been translated into 25 languages, and won both the Melissa Nathan Award and Romantic Novel of the Year 2013. Aged 11, she won a national fan competition to meet the Doctor and was mistaken for a boy by Peter Davison. Jacqueline Rayner is the author of over 40 books and audio plays, including number one bestseller The Stone Rose, the highest-selling Doctor Who novel of all time, and two Doctor Who 'Quick Reads' for World Book Day. She lives in Essex with her husband and twin sons, and writes regularly for Doctor Who Magazine. Una McCormack is a New York Times bestselling author. She has written four Doctor Who novels: The King's Dragon and The Way through the Woods (featuring the Eleventh Doctor, Amy, and Rory); Royal Blood (featuring the Twelfth Doctor and Clara), and Molten Heart (featuring the Thirteenth Doctor, Yaz, Ryan and Graham). She is also the author of numerous audio dramas for Big Finish Productions. Steve Cole is an editor and children's author whose sales exceed three million copies. His hugely successful Astrosaurs young fiction series has been a UK top-ten children's bestseller. His several original Doctor Who novels have also been bestsellers. Vinay Patel is a playwright and screenwriter. His television debut was the BAFTA-winning Murdered By My Father and for Doctor Who he has written Demons of the Punjab. His latest play, An Adventure, ran at the Bush Theatre in 2018. Elsewhere, he contributed to the bestselling collection of essays, The Good Immigrant. George Mann is the author of the bestselling Doctor Who: Engines of War and Newbury & Hobbes steampunk mystery series. He has edited a number of anthologies including The Solaris Book of New Science Fiction, The Solaris Book of New Fantasy and a retrospective collection of Sexton Blake stories. He lives near Grantham, UK, with his wife, son and daughter. Susie Day is the author of the Pea's Book and Secrets series from Puffin. Her latest novel for children, Max Kowalski Didn't Mean It, is about dragons and toxic masculinity. Between books, she works as a copywriter in Birmingham. Susie currently lives in Coventry with her partner and two silly cats. Mike Tucker is a visual effects designer and author who has written several original Doctor Who novels as well as fiction for other shared universes. He has also co-written numerous factual books relating to film and television, including Impossible Worlds and the TARDIS Instruction Manual. Joy Wilkinson is an award-winning writer working across film, television, theatre and radio. As well as Doctor Who her TV credits include Nick Nickleby and The Watch. Her directing debut - the film Ma'am - is released in 2020. Beverly Sanford's first Young Adult novel, The Wishing Doll, was published by Badger Learning in 2014, followed by Remember Rosie, Silent Nation and two non-fiction books. A BBC Writer's Room semi-finalist (2011) and an Editor's Choice in the Jim Henson Co/Penguin Dark Crystal Author Quest (2014), Bev is currently working on a screenplay for Sun Rocket Films and a children's fiction series.

GOR010097312
Doctor Who: The Target Storybook by Terrance Dicks
Terrance Dicks
Used - Very Good
Hardback
Ebury Publishing
2019-10-24
432
1785944746
9781785944741
N/A
Book picture is for illustrative purposes only, actual binding, cover or edition may vary.
This is a used book - there is no escaping the fact it has been read by someone else and it will show signs of wear and previous use. Overall we expect it to be in very good condition, but if you are not entirely satisfied please get in touch with us.