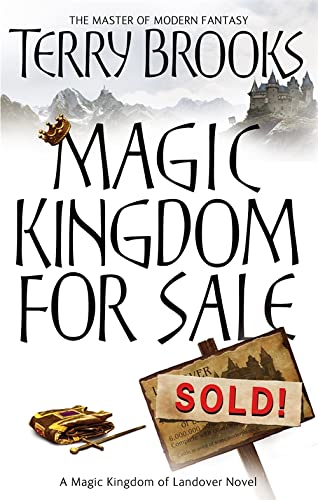 MAGIC KINGDOM FOR SALE/SOLD! is the first volume in a gripping fantasy of mystery, magic and adventure from the author of the bestselling Shannara series.

Landover was a genuine magic kingdom, complete with fairy folk and wizardry, just as the advertisement had promised. But after he purchased it for a million dollars, Ben Holiday discovered that there were a few details the ad had failed to mention...

Such as the fact that the kingdom is falling into ruin. The barons refuse to recognize a king and taxes haven't been collected for years. The dragon, Strabo, is laying waste to the countryside, while the evil witch, Nightshade, is plotting to destroy no less than everything. And if that weren't enough for a prospective king to deal with, Ben soon learns that the Iron Mark, terrible lord of the demons, has challenged all pretenders to the throne of Landover to a duel to the death - a duel no mere mortal can hope to win.

But Ben Holiday has one human trait that even magic can't overcome. Ben Holiday is stubborn.

'A master of the craft . . . required reading' Brent Weeks

'I can't even begin to count how many of Terry Brooks's books I've read (and re-read) over the years' Patrick Rothfuss, author of The Name of the Wind

'I would not be writing epic fantasy today if not for Shannara' Peter V. Brett, author of The Painted Man

Terry's place is at the head of the fantasy world -- Philip Pullman
I can't even begin to count how many of Terry Brooks's books I've read (and re-read) over the years -- Patrick Rothfuss, author of THE NAME OF THE WIND
If you haven't read Terry Brooks, you haven't read fantasy -- Christopher Paolini, author of ERAGON
A marvellous fantasy trip * Frank Herbert *
If Harry Potter has given you a thirst for fantasy and you have not discovered the magic of Terry Brooks, you are in for a treat * ROCKY MOUNTAIN NEWS *
Confirms Terry's place at the head of the fantasy world * Philip Pullman *
Terry Brooks was a practising attorney for many years, but now writes full time. His first novel, THE SWORD OF SHANNARA, remained on the New York Times bestseller list for 5 months. Every one of his novels that have followed since has been an international bestseller.
GOR001169639
Magic Kingdom For Sale/Sold: Magic Kingdom of Landover Series: Book 01 by Terry Brooks
Terry Brooks
Magic Kingdom of Landover
Used - Very Good
Paperback
Little, Brown Book Group
2007-05-14
352
1841495557
9781841495552
N/A
Book picture is for illustrative purposes only, actual binding, cover or edition may vary.
This is a used book - there is no escaping the fact it has been read by someone else and it will show signs of wear and previous use. Overall we expect it to be in very good condition, but if you are not entirely satisfied please get in touch with us.
Trustpilot