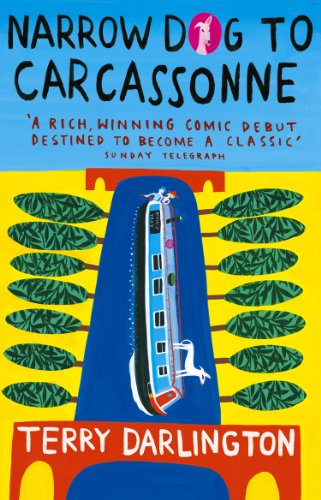 In Stock
13,69 $
inc. GST
When they retired, Terry and Monica Darlington decided to sail their canal narrow boat across the Channel and down to the Mediterranean, together with their whippet Jim. They took advice from experts, who said they would die, together with their whippet Jim. Aliens, vandals, and the walking dead all stand between three innocents and their goal.
Very Good Good Well Read
40 in stock

On the Phyllis May you dive through six-foot waves in the Channel, are swept down the terrible Rhone, and fight for your life in a storm among the flamingos of the Camargue.
You meet the French nobody meets - poets, captains, historians, drunks, bargees, men with guns, scholars, madmen - they all want to know the people on the painted boat and their narrow dog.
You visit the France nobody knows - the backwaters of Flanders, the canals beneath Paris, the heavenly Yonne, the lost Burgundy Canal, the islands of the Saone, and the forbidden ways to the Mediterranean.

Aliens, dicks, trolls, vandals, gongoozlers, killer fish and the walking dead all stand between our three innocents and their goal - many-towered Carcassonne.

A richly atmospheric journey suffused with summer heat and occasional cabin fever, reaching its climax on the flamingo-studded inland sea of the Camargue... The writing is as muscular and lean as its canine hero, conjuring up dawn mist or giant catfish in prose haiku before moving on to the next killer one-liner... A rich and winning comic debut, destined to become a classic of the downshifting genre * Sunday Telegraph *
A stunning book - racy, chatty, touching and very, very funny -- Joanna Lumley
The most amazing canal journey of them all * Daily Mail *
One of my favourite books of the year -- Emma Soames * Saga Magazine *
An astonishing read -- Libby Purves * Radio 4 Midweek *

Terry Darlington was brought up in Pembroke Dock during the war, between a Sunderland flying boat base and an oil terminal.

He survived and moved to Staffordshire, where he founded Research Associates, the international market research firm, and Stone Master Marathoners, the running club.

Like many Welshmen he is talkative and confiding, but ill at ease with practical matters and liable to linger in public houses.

He likes boating but knows nothing about it.

Monica Darlington comes from Radnorshire.Her father was a gardener and her mother a housemaid, or perhaps it was the other way round.

She has a first class degree in French, has run thirty marathons, and can leap tall buildings with a single bound.

Her three children have all reproduced themselves, removing doubts about whether she and Terry are the same species.

She quite likes boating but knows nothing about it.

Brynula Great Expectations (Jim) is sprung from a long line of dogs with ridiculous names.

Jim can run at forty miles an hour.He is cowardly, thieving, and disrespectful and hates boating.

GOR000454949
Narrow Dog To Carcassonne by Terry Darlington
Terry Darlington
Used - Very Good
Paperback
Transworld Publishers Ltd
2006-05-03
432
0553816691
9780553816693
Short-listed for Saga Award for Wit 2005
Book picture is for illustrative purposes only, actual binding, cover or edition may vary.
This is a used book - there is no escaping the fact it has been read by someone else and it will show signs of wear and previous use. Overall we expect it to be in very good condition, but if you are not entirely satisfied please get in touch with us.