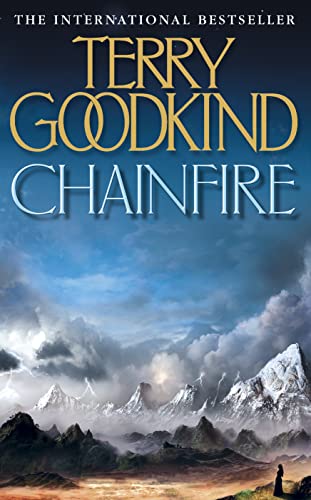 From internationally bestselling author Terry Goodkind, comes this outstanding epic adventure set in the captivating world of his classic Sword of Truth novels.

From internationally bestselling author Terry Goodkind, comes this outstanding epic adventure set in the captivating world of his classic Sword of Truth novels.

The Sword of Truth is Terry Goodkind's wonderfully creative, seamless, and stirring epic fantasy set in a fascinating world rich in detail, history and incredible violence.

Reluctant hero turned magical warrior Richard Rahl has long since learned the wizard's first rule (People are stupid and will believe almost anything) and accepted his fate. With his beloved Kahlan Amnell, the last Mother Confessor, he has battled unearthly adversaries, military foes, the Underworld, the malign and wild magic of the Old World, even the elements themselves.

Now Terry Goodkind, acclaimed and superlatively gifted storyteller, delivers another thrilling novel, with all the complexity and taut characterization we've come to expect from this master of fantasy.

'Everything one could ask for in an epic fantasy'
Publishers Weekly

Goodkind was born and raised in Omaha, Nebraska, where he also attended art school, one of his many interests on the way to becoming a writer. Besides a career in wildlife art, he has been a cabinet maker, violin maker, and he has done restoration work on rare and exotic artifacts from around the world - each with its own story to tell, he says. In 1983 Goodkind moved to the forested mountains he loves. There, in the woods near the ocean, he built the house where he and his wife, Jeri, live, and came at last to tell his own stories.

GOR001228242
Chainfire by Terry Goodkind
Terry Goodkind
Used - Very Good
Paperback
HarperCollins Publishers
2006-01-25
752
0007145624
9780007145621
N/A
Book picture is for illustrative purposes only, actual binding, cover or edition may vary.
This is a used book - there is no escaping the fact it has been read by someone else and it will show signs of wear and previous use. Overall we expect it to be in very good condition, but if you are not entirely satisfied please get in touch with us.