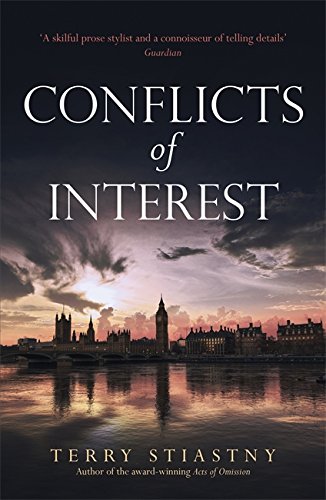 Conflicts of Interest
by Terry Stiastny

Conflicts of Interest by Terry Stiastny

'A skilful prose stylist and a connoisseur of telling details' Guardian

Lawrence Leith has retreated from his once-successful career in TV to a small village in the south of France to mourn the end of his marriage and the loss of his job.

When his old colleague Martin Elliott arrives for a summer holiday, surrounded by his lovely family and new, influential friends, he seems to have everything that Lawrence lacks. Martin is convinced that Lawrence should get back in the game, even if that involves returning to Africa, where it once nearly ended for both of them.

As Martin's carefully cultivated image begins to slip, Lawrence recovers his urge to find out the real story - one which will force him to choose between his friend and his principles.

Masterfully constructed and universally topical, Conflicts of Interest is a novel about personal betrayal and political double-dealing, about the realities of being in the public eye and how the truth, no matter how hidden, will always out.

The Provence setting, which I know well, is skilfully evoked, as are all the settings and relationships in this tense and engaging story * Literary Sofa *
Beautifully written and well-constructed, this is a fine book - thoroughly believable and yet shocking too * Country Life *

The majority of Terry Stiastny's journalistic career was spent reporting for BBC News, which she left in 2012. During her time at the BBC, she worked in Berlin and Brussels, covered politics in Westminster and spent many years on BBC Radio 4 news programmes. She was educated at Oxford University, studying PPE at Balliol College and International Relations (MPhil) at St Antony's College. She lives in London with her husband and two sons. Her first book, Acts of Omission, won the Paddy Power Political Fiction Book of the Year Award 2014.

GOR010026299
Conflicts of Interest by Terry Stiastny
Terry Stiastny
Used - Very Good
Paperback
John Murray Press
2018-07-12
304
1444794396
9781444794397
N/A
Book picture is for illustrative purposes only, actual binding, cover or edition may vary.
This is a used book - there is no escaping the fact it has been read by someone else and it will show signs of wear and previous use. Overall we expect it to be in very good condition, but if you are not entirely satisfied please get in touch with us.