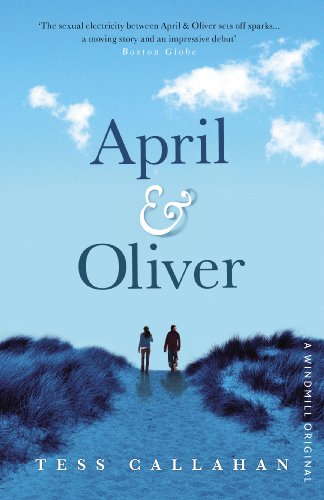 In Stock
$14.49
+10% GST
April and Oliver are soul mates, the attraction between them has always been palpable. Oliver, the responsible, newly engaged law student, finds himself drawn ever closer to the reckless, mystifying April - and cracks begin to appear in his carefully constructed life.
Very Good Good
Only 4 left

April and Oliver are soul mates, the attraction between them has always been palpable. But as the years have passed this once inseparable couple have become strangers. Only after the sudden death of April's brother do their wildly different lives collide once again. Oliver, the responsible, newly engaged law student, finds himself drawn ever closer to the reckless, mystifying April - and cracks begin to appear in his carefully constructed life. Even as Oliver attempts to rescue his childhood friend from her grief, her menacing boyfriend, and herself, it is obvious that Oliver has some secrets of his own - secrets he has never shared with anyone. April alone knows, and her reappearance derails him. But is it April's life that is unravelling, or his own? And will their magnetic attraction for one another ever lead to happiness? Or are they better apart?

"In the delicious tradition of Jane Austen... The sexual electricity between April and Oliver sets off sparks... The result is a moving story and an impressive debut." * Boston Globe *
"Readers will find their bumpy road compelling, a sensitive and emotional account of two people grappling with the complicated force of mutual attraction when it strikes the right people at the wrong time." * Washington Post *
"In this memorable debut, Callahan offers a uniquely funereal love story that focuses on a stagnant friendship-turned-untenable romance between unlikely life-long friends... Callahan's poetic style and grasp of emotion gives proper weight to April's loss and Oliver's secrets, and is sure to engage, sadden, and enthrall readers." * Publishers Weekly *
"Callahan spins a dark, gritty tale of love, yearning, and choices while presenting engaging characters and substantial action that packs more than a few punches. Wise beyond words." * Library Journal *
"Readers will savour the bittersweet taste of first love with a twist of darkness in Tess Callahan's debut novel... Callahan's grace and restraint that are sure to win her legions of readers, beguiled by her prose and yearning for her next book." * www.bookpage.com *

A painter, teacher and mother of twins, Tess Callahan has written for AGNI, Cottonwood, The Stylus Anthology: 1950-2000, The Boston College Magazine, Newsday and elsewhere through syndication. Tess has an MFA in fiction from Bennington College. April & Oliver is her first novel.

GOR001959989
April & Oliver by Tess Callahan
Tess Callahan
Used - Very Good
Paperback
Cornerstone
2010-05-06
336
0099537524
9780099537526
N/A
Book picture is for illustrative purposes only, actual binding, cover or edition may vary.
This is a used book - there is no escaping the fact it has been read by someone else and it will show signs of wear and previous use. Overall we expect it to be in very good condition, but if you are not entirely satisfied please get in touch with us.