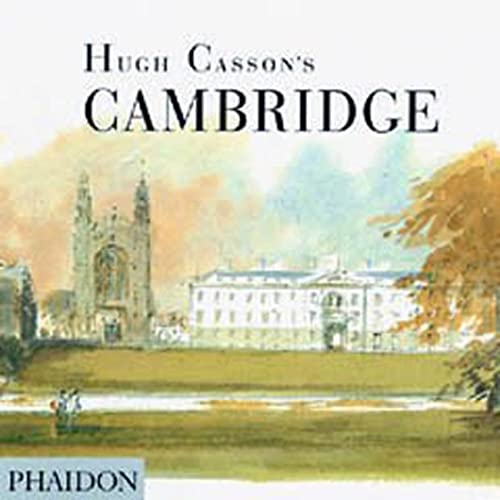 Hugh Casson's Cambridge
by The Estate Of Hugh Casson

In Stock
$31.99
inc. GST
A distinguished architect's pictorial celebration of one of Britain's most famous cities.
Like New Very Good Good
Only 1 left

Hugh Casson's Cambridge by The Estate Of Hugh Casson

The city of Cambridge, situated at the convergence of 'four roads and a sluggish river', can boast a magnificent variety of buildings of every period, forming a mesmerizing man-made landscape. This enchanting illustrated notebook is a celebration of that city, exploring not only the imposing and the impressive aspects to the city but also its more intimate and unusual spaces, textures and silhouettes. Sir Hugh Casson's lively, evocative watercolours and engaging text capture the essence of this magnificent city in a book that will inspire and delight not only the new visitor but also those who, like Sir Hugh himself, have known and loved Cambridge for years.

His analogous architectural analysis of the city of Oxford, rivalling Cambridge in its architectural diversity and evocative atmosphere, is portrayed with equally astounding erudition and humanism by Sir Hugh Casson, in a companion volume, also available from Phaidon.

The fluid and absorbing nature of Casson's text, together with the seductive and astonishingly accurate illustrations, makes this two-volume series an elegant and eloquent overview of two cities that are perhaps the most architecturally momentous in Britain.

About The Estate Of Hugh Casson

Sir Hugh Casson (1910-99) was educated at St John's College, Cambridge, and had a long and distinguished career as an architect. He was Director of Architecture for the Festival of Britain in 1951, and President of the Royal Academy, 1976-84.

GOR009972852
Hugh Casson's Cambridge by The Estate Of Hugh Casson
The Estate Of Hugh Casson
Used - Like New
Paperback
Phaidon Press Ltd
1998-08-27
96
071483811X
9780714838113
N/A
Book picture is for illustrative purposes only, actual binding, cover or edition may vary.
This is a used book - there is no escaping the fact it has been read by someone else and it will show signs of wear and previous use. Overall we expect it to be in very good condition, but if you are not entirely satisfied please get in touch with us.