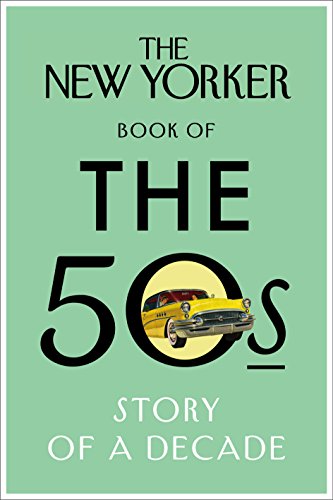 Used Price
$47.99
inc. GST
Free Shipping in Australia
The 1950s are enshrined in the popular imagination as the decade of poodle skirts and "I Like Ike." But this was also a complex time, in which the afterglow of Total Victory firmly gave way to Cold War paranoia. In this volume, classic works of reportage and fiction are complemented by new contributions from the magazine's writers.
Like New

The New Yorker Book of the 50s Summary

The 1950s are enshrined in the popular imagination as the decade of poodle skirts and "I Like Ike." But this was also a complex time, in which the afterglow of Total Victory firmly gave way to Cold War paranoia. A sense of trepidation grew with the Suez Crisis and the H-bomb tests. At the same time, the fifties marked the cultural emergence of extraordinary new energies, like those of Thelonious Monk, Sylvia Plath and Tennessee Williams.

The New Yorker was there in real time, chronicling the tensions and innovations that lay beneath the era's placid surface. In this thrilling volume, classic works of reportage, criticism, and fiction are complemented by new contributions from the magazine's present all-star line-up of writers, including Jonathan Franzen, Malcolm Gladwell, and Jill Lepore.

Here are indelible accounts of the decade's most exciting players: Truman Capote on Marlon Brando as a pampered young star; Berton Roueche on Jackson Pollock in his first flush of fame. Ernest Hemingway, Emily Post, Bobby Fischer, and Leonard Bernstein are also brought to vivid life in these pages.

Among the audacious young writers who began publishing in the fifties was one who would become a stalwart for the magazine for fifty-five years: John Updike. Also featured here are great early works from Philip Roth and Nadine Gordimer, as well as startling poems by Theodore Roethke and Anne Sexton.

The New Yorker Book of the 50s Reviews

A magnificent anthology * Literary Review *
[A] fascinating volume...More than just a time capsule, this collection features journalism at its most powerful. * Compass magazine, best of this winter's books *
Superb: a gift that keeps on giving and a fine introduction to the life and letters of a supposedly (but not really) gray decade. * Kirkus Review *

About The New Yorker Magazine

The New Yorker magazine began publishing in 1925, and has long established itself as a singular and singularly beloved institution in America's cultural firmament. With its offices located in New York, the magazine addresses a general-interest readership that is spread across the world, and includes more than a million loyal subscribers who are devoted to the magazine's originality, verve, integrity and wit.

GOR010756507
The New Yorker Book of the 50s: Story of a Decade by The New Yorker Magazine
The New Yorker Magazine
Used - Like New
Hardback
Cornerstone
2015-06-26
784
043402242X
9780434022427
N/A
Book picture is for illustrative purposes only, actual binding, cover or edition may vary.
The book has been read, but looks new. The book cover has no visible wear, and the dust jacket is included if applicable. No missing or damaged pages, no tears, possible very minimal creasing, no underlining or highlighting of text, and no writing in the margins.