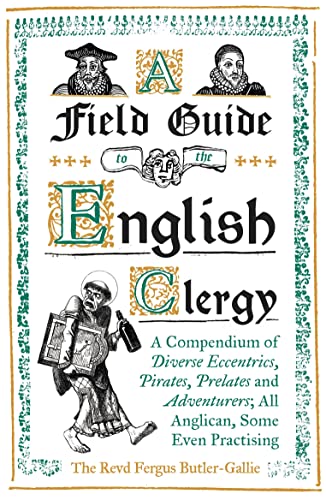 A Field Guide to the English Clergy Summary

A Field Guide to the English Clergy: A Compendium of Diverse Eccentrics, Pirates, Prelates and Adventurers; All Anglican, Some Even Practising by The Revd Fergus Butler-Gallie

A Book of the Year for The Times, Mail on Sunday and BBC History Magazine

Judge not, lest ye be judged. This timeless wisdom has guided the Anglican Church for hundreds of years, fostering a certain tolerance of eccentricity among its members.

The 'Mermaid of Morwenstow' excommunicated a cat for mousing on a Sunday. When he was late for a service, Bishop Lancelot Fleming commandeered a Navy helicopter. 'Mad Jack' swapped his surplice for a leopard skin and insisted on being carried around in a coffin. And then there was the man who, like Noah's evil twin, tried to eat one of each of God's creatures...

In spite of all this they saw the church as their true calling. After all, who cares if you're wearing red high heels when there are souls to be saved?

Customer Reviews - A Field Guide to the English Clergy

A Field Guide to the English Clergy Reviews

'One of the best Christmas books of the past few years... both hilarious and unusually elegant in conception and execution.' * Marcus Berkmann, Spectator *
'A group biography of ecclesiastical nuttiness... All gloriously mad.' * The Times, Books of the Year 2018 *
'Eye-popping tales of lunacy, debauchery and depravity...Butler-Gallie knows whereof he writes, being a curate himself, and he has done a splendid job presenting a smorgasbord of most peculiar parsons.' * Sebastian Shakespeare, Daily Mail *
'We have...always kept a special haven for oddballs in the Church of England, as Fergus Butler-Gallie demonstrates in this entertaining compendium...Their foibles cover all bases from absentmindedness to epic drunkenness...I'm glad I read this one. It's a lot of fun.' * The Times *
'Entertainingly erudite...But it is also a surprisingly profound work...For all its mischief, Butler-Gallie's work of lightly worn erudition is a paean to a great English institution, finely tuned to the temper of its representatives, good, bad and indifferent. We should treasure it more.' * Literary Review *
'A humorous compendium of some of the oddball clergy who have served the Church over the centuries...These thumbnail portraits reveal a very broad church indeed.' * New Statesman *
'The Church of England has produced some real oddballs in its time, and this is an entertaining gallop through several centuries' worth of them...Butler-Gallie has done his homework, digging out some rare gems...This is the story not just of eccentrics, but also of a leisured age that is no more.' * Harry Mount, Spectator *
'Wonderfully entertaining...A hilarious yet thoughtful reminder that the Christian faith wasn't always thought incompatible with a sense of humour or a healthy bolshiness.' * Sunday Times *
'It may have the makings of a modern classic...Butler-Gallie chronicles not just Anglican follies, but also human weaknesses which we all share and with which we can perhaps sympathise.' * The Catholic Herald *
'This is a ridiculously enjoyable book: funny, compassionate, and wonderfully well-written.' -- Tom Holland
'A delightful, sympathetic, humorous and earthed cocktail of quirky English clergy.' -- The Rt Revd David Wilbourne

About The Revd Fergus Butler-Gallie

The Reverend Fergus Butler-Gallie is a young curate in the Church of England who once accidentally appeared on Only Connect. He holds a bachelor's degree in history from the University of Oxford and a bachelor's degree in theology from the University of Cambridge. He is (according to his own taxonomy) a Bon Viveur first and foremost, with a soupcon of Roguishness and Prodigality. This is his first book.

GOR009236554
A Field Guide to the English Clergy: A Compendium of Diverse Eccentrics, Pirates, Prelates and Adventurers; All Anglican, Some Even Practising by The Revd Fergus Butler-Gallie
The Revd Fergus Butler-Gallie
Used - Like New
Hardback
Oneworld Publications
2018-10-04
192
1786074419
9781786074416
N/A
Book picture is for illustrative purposes only, actual binding, cover or edition may vary.
The book has been read, but looks new. The book cover has no visible wear, and the dust jacket is included if applicable. No missing or damaged pages, no tears, possible very minimal creasing, no underlining or highlighting of text, and no writing in the margins.