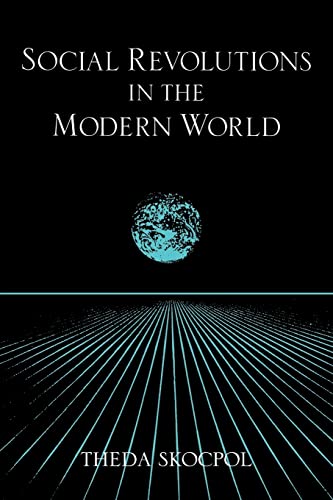 Used Price
42,99 $
inc. GST
Free Shipping in Australia
In this collection of essays, Theda Skocpol, author of the award-winning book States and Social Revolutions (1979), updates her arguments about social revolutions. How are we to understand recent revolutionary upheavals in countries across the globe? Why have social revolutions happened in some countries, but not in others that seem similar?
Reviews:
Trustpilot
Very Good

In this collection of essays, Theda Skocpol, author of the award-winning book States and Social Revolutions (1979), updates her arguments about social revolutions. How are we to understand recent revolutionary upheavals in countries across the globe? Why have social revolutions happened in some countries, but not in others that seem similar? Skocpol shows how she and other scholars have used ideas about states and societies to identify the particular types of regimes that are susceptible to the growth of revolutionary movements and vulnerable to transfers of state power to revolutionary challengers. Skocpol engages in thoughtful dialogue with critics, and she suggests how culture and ideology can properly be incorporated into historical and comparative studies. She also vigorously defends the value of an institutionalist, comparative and historical approach against recent challenges from Marxists, rational choice theorists, and culturally oriented interpreters of particular revolutions.

'... provides an extremely useful companion to her thinking ... Skocpol writes with intelligence, grace and lucidity.' International Affairs
This work is very useful for the student reader because of its presentation of fundamental views in the field and as an introduction to conflicting major theories in the study of social revolution. It is of interest to the most sophisticated reader in its assertion of Skocpol's views. It is a worthwhile addition to a university library as well as the private one of any person interested in social revolution." Perspectives on Political Science
"...provides an extremely useful companion to [Skocpol's] thinking. The experience of reading it is an unusual one, for Skocpol writes with equal intelligence, grace and lucidity." International Affairs
"...one of America's leading comparative sociologists refines and expands the arguments she made in her 1979 book, States and Social Revolutions, to account for the numerous Third World revolutions since then....consistently sophisticated and informative." Foreign Affairs
"A sophisticated research design using Boolean qualitative comparative analysis is used to examine more than two dozen instances of attempted armed insurrection in Latin America since 1956 to account for successes in Cuba and Nicaragua and failures everywhere else. Skocpol uses these works to assess what has been learned about social revolutions to date....This is a well-chosen set of Skocpol's writings on revolution over three decades, and it can be read profitably in whole or in part by all who would follow in her footsteps." John Foran, American Political Science Review

GOR007835422
Social Revolutions in the Modern World by Theda Skocpol (Harvard University, Massachusetts)
Theda Skocpol (Harvard University, Massachusetts)
Cambridge Studies in Comparative Politics
Used - Very Good
Paperback
Cambridge University Press
1994-09-30
368
0521409381
9780521409384
N/A
Book picture is for illustrative purposes only, actual binding, cover or edition may vary.
This is a used book - there is no escaping the fact it has been read by someone else and it will show signs of wear and previous use. Overall we expect it to be in very good condition, but if you are not entirely satisfied please get in touch with us.