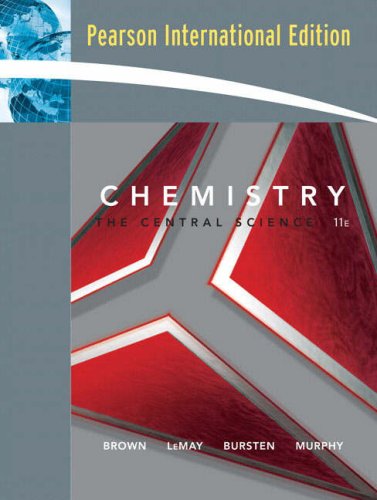 For 2-semester or 3-quarter courses in general chemistry

Trust. Innovation. Give your students the opportunity to succeed with the book you trust and the innovation of MasteringChemistry so you can focus on what truly matters in your general chemistry course.

Trust - Authorship, scientific accuracy, and clarity from 11 editions of experience has made Chemistry: The Central Science the most trusted book on the market.

Innovation - Chemistry: The Central Science continues to innovate not only inside the text but with MasteringChemistry, the most advanced online tutorial and assessment program available.

THEODORE L. BROWN received his Ph.D. from Michigan State University in 1956. Since then, he has been

a member of the faculty of the University of Illinois, Urbana-Champaign, where he is now Professor of Chemistry,

Emeritus. He served as Vice Chancellor for Research, and Dean, The Graduate College, from 1980 to 1986, and as

1993. Professor Brown has been an Alfred P. Sloan Foundation Research Fellow and has been awarded a

Guggenheim Fellowship. In 1972 he was awarded the American Chemical Society Award for Research in Inorganic

Chemistry, and received the American Chemical Society Award for Distinguished Service in the Advancement of

Inorganic Chemistry in 1993. He has been elected a Fellow of both the American Association for the Advancement

of Science and the American Academy of Arts and Sciences.

(Washington) and his Ph.D. in Chemistry in 1966 from the University of Illinois (Urbana). He then joined the

faculty of the University of Nevada, Reno, where he is currently Professor of Chemistry, Emeritus. He has enjoyed

Great Britain, and at the University of California, Los Angeles. Professor LeMay is a popular and effective teacher,

who has taught thousands of students during more than 35 years of university teaching. Known for the clarity of his

lectures and his sense of humor, he has received several teaching awards, including the University Distinguished

BRUCE E. BURSTEN received his Ph.D. in Chemistry from the University of Wisconsin in 1978. After two

years as a National Science Foundation Postdoctoral Fellow at Texas A&M University, he joined the

faculty of The Ohio State University, where he rose to the rank of Distinguished University Professor. In

2005, he moved to his present position at the University of Tennessee, Knoxville as Distinguished

Professor of Chemistry and Dean of the College of Arts and Sciences. Professor Bursten has been a

Fellow, and he has been elected a Fellow of the American Association for the Advancement of Science. At

Ohio State he has received the University Distinguished Teaching Award in 1982 and 1996, the Arts and

Award in 1990. He received the Spiers Memorial Prize and Medal of the Royal Society of Chemistry in

2003, and the Morley Medal of the Cleveland Section of the American Chemical Society in 2005. He was

elected President of the American Chemical Society for 2008. In addition to his teaching and service

activities, Professor Bursten's research program focuses on compounds of the transition-metal and

CATHERINE J. MURPHY received two B.S. degrees, one in Chemistry and one in Biochemistry, from the

University of Illinois, Urbana-Champaign, in 1986. She received her Ph.D. in Chemistry from the University of

Wisconsin in 1990. She was a National Science Foundation and National Institutes of Health Postdoctoral Fellow at

the California Institute of Technology from 1990 to 1993. In 1993, she joined the faculty of the University of South

Carolina, Columbia, where she is currently the Guy F. Lipscomb Professor of Chemistry. Professor Murphy has

been honored for both research and teaching as a Camille Dreyfus Teacher-Scholar, an Alfred P. Sloan Foundation

winner and a subsequent NSF Award for Special Creativity. She has also received a USC Mortar Board Excellence

in Teaching Award, the USC Golden Key Faculty Award for Creative Integration of Research and Undergraduate

Research Mentor Award. Since 2006, Professor Murphy has served as a Senior Editor to the Journal of Physical

nanomaterials, and on the local structure and dynamics of the DNA double helix.

University in 1991. He received a M.S. degree in Materials Science and a Ph.D. in Chemistry from Oregon State

University in 1996. He spent two years as a postdoctoral researcher in the Department of Physics at Brookhaven

National Laboratory. In 1998, he joined the faculty of the Chemistry Department at The Ohio State University where he

currently holds the rank of Associate Professor. He has enjoyed visiting professorships at the University of

Bordeaux, in France, and the University of Sydney, in Australia. Professor Woodward has been an Alfred P. Sloan

Foundation Research Fellow and a National Science Foundation CAREER Award winner. He currently serves as an

Associate Editor to the Journal of Solid State Chemistry and as the director of the Ohio REEL program, an NSF

classes in 15 colleges and universities across the state of Ohio. Professor Woodward's research program focuses on

7 Periodic Properties of the Elements 254

18 Chemistry of the Environment 766

25 The Chemistry of Life: Organic and Biological Chemistry 1050

Answers to Selected Exercises A-1

Answers to "Give It Some Thought" A-00

GOR002803603
Chemistry: The Central Science: International Edition by Theodore E. Brown
Theodore E. Brown
Used - Very Good
Paperback
Pearson Education (US)
2008-01-01
1232
0132358484
9780132358484
N/A
Book picture is for illustrative purposes only, actual binding, cover or edition may vary.
This is a used book - there is no escaping the fact it has been read by someone else and it will show signs of wear and previous use. Overall we expect it to be in very good condition, but if you are not entirely satisfied please get in touch with us.