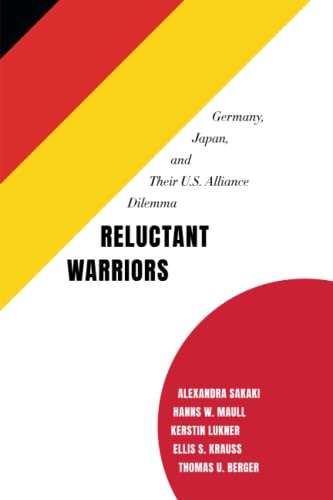 Used Price
$70.99
inc. GST
Free Shipping in Australia
A team of noted international experts critically examines how and why Germany and Japan have modified their military postures since 1990, and assesses how far the countries still have to go - and why. The contributors also highlight the risks the United States takes if it makes too simplistic a demand for the two countries to "do more".
Reviews:
Trustpilot
Very Good

Can Germany and Japan do more militarily to uphold the international order?

Since the end of World War II, Germany and Japan have been the most reluctant of all major U.S. allies to take on military responsibilities. Given their histories, this reluctance certainly is understandable. But because of their size and economic importance, Germany and Japan are the most important U.S. allies in Europe and in East Asia, respectively, and their long-term reluctance to share the defense burden has become a perennial source of frustration for Washington.

The potential security roles of Germany and Japan are becoming increasingly important given the uncertainty, indeed volatility, of today's international environment. Under President Trump, friction among allies over burden-sharing is more intense than ever before. Meanwhile, the security environments in Europe and Asia have deteriorated because of the resurgence of a belligerent Russia under Vladimir Putin, the steady rise of an increasingly assertive China, and North Korea's worrisome acquisition of nuclear weapons.

Partly in response to these developments, Germany and Japan in recent years have boosted their security efforts, mainly by increasing defense spending and taking on a somewhat broader range of military missions. Even so, because of their cultures of anti-militarism resistance remains strong in both countries to rebuilding the military and assuming more responsibility for sustaining regional or even global peace.

In Reluctant Warriors, a team of noted international experts critically examines how and why Germany and Japan have modified their military postures since 1990 so far, and assesses how far the countries still have to go and why. The contributors also highlight the risks the United States takes if it makes too simplistic a demand for the two countries to "do more.

Thomas U. Berger is a professor at the Frederick S. Pardee School of Global Studies, Boston University. His main areas of research are international security, with an emphasis on Europe and East Asia, the politics of memory and the role of culture in politics and international relations.

Ellis S. Krauss is Professor Emeritus of the School of Global Policy and Strategy at the University of California, San Diego. He has been author or editor of nearly 100 books and articles on Japan's domestic politics and foreign policy.

Kerstin Lukner is managing director of AREA (Alliance on Research on East Asia) Ruhr, a research and teaching alliance of the Universities of Bochum and Duisburg-Essen, Germany. She has authored a monograph on Japan's role in the United Nations as well as numerous book chapters and journal articles related to Japan's foreign and security policy.

Hanns W. Maull is Senior Distinguished Fellow at the German Institute for International and Security Affairs (SWP), Senior Policy Fellow for China's Global Role at the Mercator Institute for China Studies (both Berlin) and Adjunct Professor of International Relations and Strategic Studies at the Johns Hopkins University SAIS Europe in Bologna.

Alexandra Sakaki is a senior associate in the Asia division at the German Institute for International and Security Affairs in Berlin, where she specializes in Japan's foreign and security policy. She is the author of Japan and Germany as Regional Actors: Evaluating Change and Continuity after the Cold War.

GOR011101690
Reluctant Warriors: Germany, Japan, and Their U.S. Alliance Dilemma by Thomas Berger
Thomas Berger
Used - Very Good
Paperback
Brookings Institution
2019-11-30
314
081573736X
9780815737360
N/A
Book picture is for illustrative purposes only, actual binding, cover or edition may vary.
This is a used book - there is no escaping the fact it has been read by someone else and it will show signs of wear and previous use. Overall we expect it to be in very good condition, but if you are not entirely satisfied please get in touch with us.