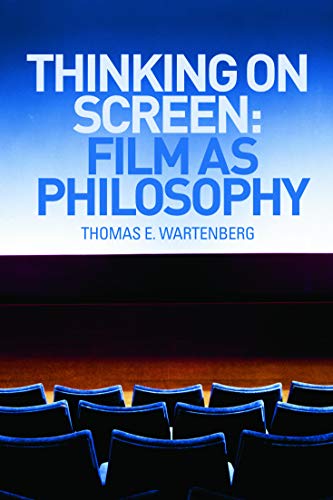 Used Price
$47.99
inc. GST
Free Shipping in Australia
Examines films' ability to discuss, and criticize ideas that have puzzled philosophers over the centuries such as the nature of personhood, the basis of morality, and epistemological skepticism. This book offers a systematic account of the ways in which specific films undertake the task of philosophy. It is of interest to students of philosophy.
Reviews:
Trustpilot
Very Good

Thinking on Screen: Film as Philosophy is an accessible and thought-provoking examination of the way films raise and explore complex philosophical ideas. Written in a clear and engaging style, Thomas Wartenberg examines films' ability to discuss, and even criticize ideas that have intrigued and puzzled philosophers over the centuries such as the nature of personhood, the basis of morality, and epistemological skepticism.

Beginning with a demonstration of how specific forms of philosophical discourse are presented cinematically, Wartenberg moves on to offer a systematic account of the ways in which specific films undertake the task of philosophy. Focusing on the films The Man Who Shot Liberty Valance, Modern Times, The Matrix, Eternal Sunshine of the Spotless Mind, The Third Man, The Flicker, and Empire, Wartenberg shows how these films express meaningful and pertinent philosophical ideas.

This book is essential reading for students of philosophy with an interest in film, aesthetics, and film theory. It will also be of interest to film enthusiasts intrigued by the philosophical implications of film.

'A powerful defense of the view that films can philosophize. Characterized by its clear and lively presentation, and by its intertwining of philosophical argument with detailed discussion of several important films, it will be of interest not just to those studying philosophy and film but to everyone who believes in the importance of film to our cognitive life.' - Berys Gaut, University of St Andrews, UK

Thomas E. Wartenberg is Professor at Mount Holyoke College and author of Unlikely Couples: Movie Romance as Social Criticism. He has edited five anthologies of philosophy and film and is film editor for Philosophy Now.

GOR008723131
Thinking on Screen: Film as Philosophy by Thomas E. Wartenberg (Mount Holyoke College, USA)
Thomas E. Wartenberg (Mount Holyoke College, USA)
Used - Very Good
Paperback
Taylor & Francis Ltd
2007-10-30
176
0415774314
9780415774314
N/A
Book picture is for illustrative purposes only, actual binding, cover or edition may vary.
This is a used book - there is no escaping the fact it has been read by someone else and it will show signs of wear and previous use. Overall we expect it to be in very good condition, but if you are not entirely satisfied please get in touch with us.