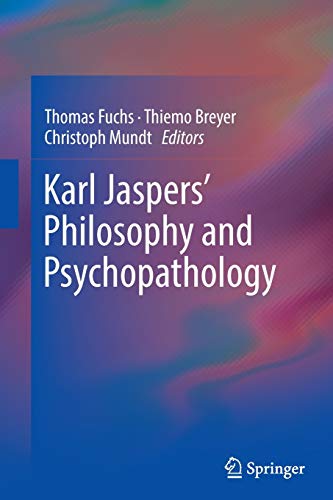 This volume is unique in bringing together the knowledge of leading international scholars and combining three dimensions of investigation that are necessary to understand Jaspers in light of contemporary questions: history (section I), methodology (section II) and application (section III).

This book is based on a congress evaluating Jaspers' basic psychopathological concepts and their anthropological roots in light of modern research paradigms. It provides a definition of delusion, his concept of "limit situation" so much challenged by trauma research, and his methodological debate. We are approaching the anniversary of Jaspers seminal work General Psychopathology in 1913. The Centre of Psychosocial Medicine of the University with its Psychiatric Hospital where Jaspers wrote this influential volume as a 29 year old clinical assistant hosted a number of international experts familiar with his psychiatric and philosophical work. This fruitful interdisciplinary discussion seems particularly important in light of the renewed interest in Jaspers' work, which will presumably increase towards the anniversary year 2013. This volume is unique in bringing together the knowledge of leading international scholars and combining three dimensions of investigation that are necessary to understand Jaspers in light of contemporary questions: history (section I), methodology (section II) and application (section III).

PROF. DR. DR. THOMAS FUCHS is the Karl Jaspers Professor of Philosophy and Psychiatry at the University of Heidelberg. He is the head of the research unit "Phenomenological Psychopathol-ogy and Psychotherapy", coordinator of the EU Marie Curie Research Training Network TESIS (Towards an Embodied Theory of Intersubjectivity) and the Volkswagen Foundation Research Project "The Brain as a Mediating Organ", as well as co-director of the Interdisciplinary Forum for Biomedicine and Cultural Studies (IFBK). His publications include: Mechanization of the Heart (Rochester University Press, 2001), The Embodied Self (Schattauer, 2010) and Ecology of the Brain (Oxford University Press, under contract).

DR. THIEMO BREYER is a postdoctoral researcher in philosophy and cognitive science at the Clinic for General Psychiatry, University of Heidelberg, lecturer at the University of Freiburg and research associate at the Husserl Archive Freiburg. He is the head of the research unit "Anthro-pology of Intersubjectivity", funded by the Baden-Wurttemberg Foundation. His publications in-clude: On the Topology of Cultural Memory (Koenigshausen & Neumann, 2007), Attentionalitat und Intentionalitat (Fink, 2011) and Synchrony and Embodied Interaction (Springer, under con-tract).

PROF. DR. EM. CHRISTOPH MUNDT is professor emeritus of psychiatry at the University of Heidel-berg, where he held a chair in psychiatry and was clinical director of the Department of General Psychiatry and the polyclinic. His publications include: Interpersonal Factors in the Origin and Course of Affective Disorders (Gaskell, 1996), Psychotherapie in der Psychiatrie (Springer, 1997) and Konzeptuelle Weiterentwicklungen im Umkreis der strukturdynamischen Psychopa-thologie (Thieme, 2004).

Part I: History and Methodology.- Psychopathology and the Modern Age. Karl Jaspers reads Hoelderlin.- Hermeneutical and dialectical thinking in psychiatry and the contribution of Karl Jaspers.- Phenomenological intuitionism and its psychiatric impact.- The reception of Jaspers' General Psychopathology outside of Europe.- Brain mythologies: Jaspers' critique of reductionism from a current perspective.- Karl Jaspers' criticism of anthropological and phenomenological psychiatry.- Perspectival knowing: Karl Jaspers and Ronald N. Giere.- Part II: Psychopathology and Psychotherapy.-Karl Jaspers on primary delusional experiences of schizophrenics: his concept of delusion compared to that of the DSM.- Delusion and double book-keeping.- Jaspers on feelings and affective states.- Jaspers' concept of "limit situation": extensions and therapeutic applications.- Psychopathology and psychotherapy in Jaspers' work and today's perspectives on psychotherapy in psychiatry.
NLS9781493944811
9781493944811
1493944819
Karl Jaspers' Philosophy and Psychopathology by Thomas Fuchs
Thomas Fuchs
New
Paperback
Springer-Verlag New York Inc.
2016-08-23
188
N/A
Book picture is for illustrative purposes only, actual binding, cover or edition may vary.
This is a new book - be the first to read this copy. With untouched pages and a perfect binding, your brand new copy is ready to be opened for the first time
Trustpilot