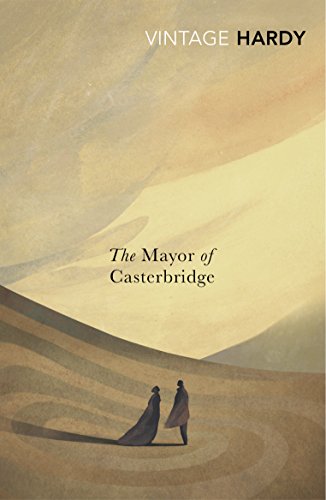 The Mayor of Casterbridge
by Thomas Hardy

Used Price
$18.99
inc. GST
Free Shipping in Australia
WITH AN INTRODUCTION BY LUCY HUGHES-HALLETTThe Mayor of Casterbridge is a man haunted by his past. He has since risen from his humble origins to become a respected pillar of the community in Casterbridge, but his secrets cannot stay hidden forever and he has many hard lessons left to learn.
Very Good

The Mayor of Casterbridge Summary

The Mayor of Casterbridge by Thomas Hardy

WITH AN INTRODUCTION BY LUCY HUGHES-HALLETT The Mayor of Casterbridge is a man haunted by his past. In his youth he betrayed his wife and baby daughter in a shocking incident that led him to swear never to touch alcohol again for twenty-one years. He has since risen from his humble origins to become a respected pillar of the community in Casterbridge, but his secrets cannot stay hidden forever and he has many hard lessons left to learn.

The Mayor of Casterbridge Reviews

"I could have picked any Hardy but this is wonderful. He is so good at portraying the highs and lows of human emotions and endeavours and setting them against the vast background of time and space that puts the smallness of the human condition into perspective" -- Jane Asher * Daily Express *
"What I love about Hardy is that anybody of any age can get into his books because he's such a good writer. All you've got to do is start reading. I could have picked any of his books but this is my favourite" -- Matthew Wright (The Wright Stuff) * Daily Express *
"It's the most tragic tale of a man who did a great wrong (he sells his wife and daughter) and pays for it later. The way Henchard arranges his life just so, only to see it wrecked and ruined by Fate - it makes me howl with pathos" -- author John Wright * Independent *
"You have to hand it to Thomas Hardy. He knew how to come up with the blackest, most fascinating of characters (principally, corn merchant and mayor Michael Henchard), then put them in a cracking predicament" * Mirror *
"A truly wonderful book" -- Actor Brian Cox * Independent on Sunday *

Thomas Hardy was born on 2 June 1840. His father was a stonemason. He was brought up near Dorchester and trained as an architect. In 1868 his work took him to St Juliot's church in Cornwall where he met his wife-to-be, Emma. His first novel, The Poor Man and the Lady, was rejected by publishers but Desperate Remedies was published in 1871 and this was rapidly followed by Under the Greenwood Tree (1872), A Pair of Blue Eyes (1873) and Far from the Madding Crowd (1874). He also wrote many other novels, poems and short stories. Tess of the D'Urbervilles was published in 1891. His final novel was Jude the Obscure (1895). Hardy was awarded the Order of Merit in 1920 and the gold medal of the Royal Society of Literature in 1912. His wife died in 1912 and he later married his secretary. Thomas Hardy died 11 January 1928.

GOR002115109
The Mayor of Casterbridge by Thomas Hardy
Thomas Hardy
Used - Very Good
Paperback
Vintage Publishing
2010-06-03
384
0099529572
9780099529576
N/A
Book picture is for illustrative purposes only, actual binding, cover or edition may vary.
This is a used book - there is no escaping the fact it has been read by someone else and it will show signs of wear and previous use. Overall we expect it to be in very good condition, but if you are not entirely satisfied please get in touch with us.