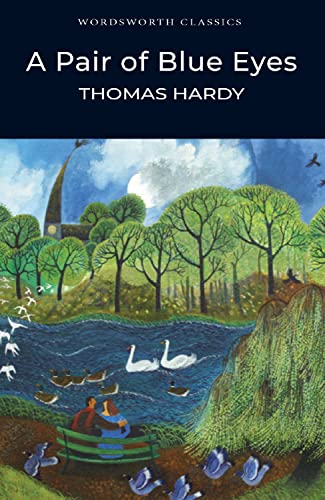 A Pair of Blue Eyes by Thomas Hardy

Rich with biographical echoes, this novel reveals the emergence of the schematic ironies which characterise the author's later works

A Pair of Blue Eyes by Thomas Hardy

With a new Introduction by Cedric Watts, Research Professor of English, University of Sussex.

With settings in Wessex and London, the novel also has some strongly autobiographical features, as the blue-eyed heroine, Elfride Swancourt, is based largely on Emma Gifford, who became Thomas Hardy's first wife. Elfride's vivacious nature attracts several lovers, but she is beset by sexual prejudice, and the ensuing ironies reveal the constraints of her times.

A Pair of Blue Eyes provides an engaging and moving experience for today's readers.

GOR000562367
A Pair of Blue Eyes by Thomas Hardy
Thomas Hardy
Wordsworth Classics
Used - Very Good
Paperback
Wordsworth Editions Ltd
1995-12-05
336
1853262773
9781853262777
N/A
Book picture is for illustrative purposes only, actual binding, cover or edition may vary.
This is a used book - there is no escaping the fact it has been read by someone else and it will show signs of wear and previous use. Overall we expect it to be in very good condition, but if you are not entirely satisfied please get in touch with us
Trustpilot