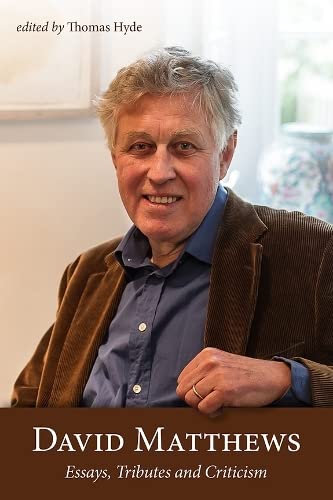 Essays and memoirs by and about one of Britain's leading symphonists. A lively collection by contributions from Roger Scruton, Judith Weir, John McCabe, Arnold Whittall, Hugh Wood and many others.

2013 saw the seventieth birthday of David Matthews, the British composer who has established an international reputation as a leading symphonist of our time. This collection, the first on his work, marks the occasion with lively contributions from a host of distinguished musicians and writers.

Matthews has supplemented his freelance career by writing extensively and personally on music, and the first part of the book includes all his important essays and reviews to date. These survey the present scene, discuss symphonists (notably Mahler and Sibelius) and focus on individual composers (notably Britten and Tippett). By including extracts from his journal and letters, Thomas Hyde's substantial editorial notes sketch out an accompanying biography. This is supplemented in the second part by extended memoirs from Roger Scruton and Peter Sculthorpe, and a collection of tributes in words and music by James Francis Brown, the Smirnov family, Maggie Hemingway, Robin Holloway, Robin Leanse, Colin Matthews, John McCabe, Sir Paul McCartney, Pavel Zemek Novak and Judith Weir.

David Matthews studied composition privately with Anthony Milner, assisted Benjamin Britten and collaborated with Deryck Cooke on the performing version of Mahler's Tenth Symphony. His large musical output includes contributions to most of the instrumental and vocal genres; he has also published monographs on Tippett (1980) and Britten (2003). For 13 years he was artistic director of the Deal Festival.

Thomas Hyde has lectured at the City University (London) and Worcester College, Oxford. His compositions include a one-man opera That Man Stephen Ward (2007), a string quartet (2010) and a violin sonata (2012).
Intriguing ... striking insights. [Four stars out of five] BBC MUSIC MAGAZINE

Celebratory volume ... Any admirer of David Matthews' music or, indeed, British music in general, will want this book, touching as it does on so many other composers and musical issues. The range of topics and composers will, I am sure, make it attractive to many people. THE CLASSICAL REVIEWER
GOR008814651
9780956600783
0956600786
David Matthews - Essays, Tributes and Criticism by Thomas Hyde
Thomas Hyde
Used - Very Good
Paperback
Plumbago Books and Arts
2014-06-19
320
N/A
Book picture is for illustrative purposes only, actual binding, cover or edition may vary.
This is a used book - there is no escaping the fact it has been read by someone else and it will show signs of wear and previous use. Overall we expect it to be in very good condition, but if you are not entirely satisfied please get in touch with us
Trustpilot