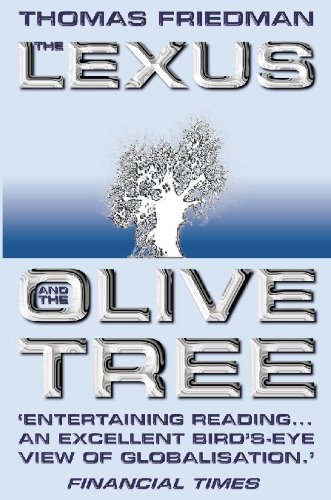 The Lexus and the Olive Tree
by Thomas L. Friedman

A powerful and accessible account of globalization - the new world order that has replaced the cold war - by the award-winning author of From Beirut to Jerusalem.

The Lexus and the Olive Tree Summary

The Lexus and the Olive Tree by Thomas L. Friedman

A powerful and accessible account of globalization - the new world order that has replaced the cold war - by the award-winning author of From Beirut to Jerusalem.

More than anything else, globalization is shaping world affairs today. We cannot interpret the day's news, or know where to invest our money, unless we understand this new system - the defining force in international relations and domestic policies worldwide. The unprecedented integration of finance, markets, nation states and technology is driving change accross the globe at an ever-increasing speed. And while much of the world is intent on building a better Lexus, on streamlining their societies and economies for the global marketplace, many people feel their traditional identities threatened and are reverting to elemental struggles over who owns which olive tree, which strip of land.

Thomas Friedman has a unique vantage point on this worldwide phenomenon. The New York Times foreign affairs columnist has travelled the globe, interviewing everyone from Brazilian peasants to new entrepreneurs in Indonesia, to Islamic students, to the financial wizards on Wall Street and in Silicon Valley, to find out what globalization means for them, and for all of us.

This ground-breaking book is essential reading for anyone who wants to know how the world really works today.

The Lexus and the Olive Tree Reviews

THOMAS FRIEDMAN was born in Minneapolis in 1943. He completed his post-graduate Middle-Eastern Studies at St Antony's College, Oxford, before becoming a journalist. From 1979 to 1981, he was UPI's Beirut correspondent. In 1982, he became the New York Times' Beirut bureau chief, moving south to Jerusalem in 1984 to become bureau chief there. In January 1989, he became the New York Times' chief diplomatic correspondent in Washington, where he now lives with his wife and two daughters. Friedman has twice won a Pulitzer Prize for his reporting from the Middle East.

GOR001625739
The Lexus and the Olive Tree by Thomas L. Friedman
Thomas L. Friedman
Used - Very Good
Paperback
HarperCollins Publishers
2000-04-17
512
0006551394
9780006551393
N/A
Book picture is for illustrative purposes only, actual binding, cover or edition may vary.
This is a used book - there is no escaping the fact it has been read by someone else and it will show signs of wear and previous use. Overall we expect it to be in very good condition, but if you are not entirely satisfied please get in touch with us.