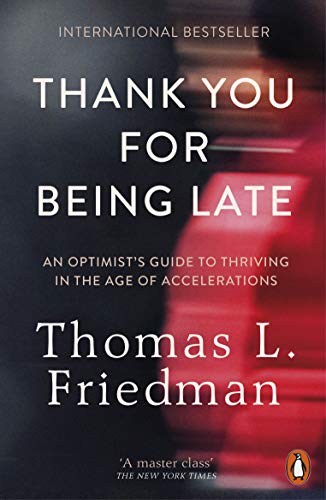 Thank You for Being Late
by Thomas L. Friedman

Thank You for Being Late Summary

Thank You for Being Late: An Optimist's Guide to Thriving in the Age of Accelerations by Thomas L. Friedman

We all sense it: something big is going on. Life is speeding up, and it is dizzying. Here Thomas L. Friedman reveals the tectonic movements that are reshaping our world, how to adapt to this new age and why, sometimes, we all need to be late.

'A master class ... As a guide for perplexed Westerners, this book is very hard to beat ... an honest, cohesive explanation for why the world is the way it is, without miracle cures or scapegoats' John Micklethwait, The New York Times Book Review

'His main piece of advice for individuals, corporations, and countries is clear: Take a deep breath and adapt. This world isn't going to wait for you' Fortune

'A humane and empathetic book' David Henkin, The Washington Post

Customer Reviews - Thank You for Being Late

Thank You for Being Late Reviews

His most ambitious book - part personal odyssey, part commonsense manifesto ... An honest, cohesive explanation for why the world is the way it is, without miracle cures or scapegoats. And that is why everybody should hope this book does very well indeed -- John Micklethwait * The New York Times *
Engaging ... In some senses Thank You For Being Late is an extension of [Friedman's] previous works, woven in with wonderful personal stories (including admirably honest discussions about the nature of being a columnist). What gives Friedman's book a new twist is his belief that upheaval in 2016 is actually far more dramatic than earlier phases. -- Gillian Tett * Financial Times *

Thomas L. Friedman has been awarded the Pulitzer Prize three times for his work with The New York Times, where he serves as the foreign affairs columnist, and is read by everyone from small-business owners to President Obama. Friedman is also the author of From Beirut to Jerusalem (1989), which won both the National Book Award and the Overseas Press Club Award, The Lexus and the Olive Tree (1999), Longitudes and Attitudes (2002), The World Is Flat (2005), which won the first Financial Times/Goldman Sachs Business Book of the Year Award, and Hot, Flat, and Crowded (2008). He lives in Bethesda, Maryland.

GOR008826949
Thank You for Being Late: An Optimist's Guide to Thriving in the Age of Accelerations by Thomas L. Friedman
Thomas L. Friedman
Used - Very Good
Paperback
Penguin Books Ltd
2017-07-31
560
0141985755
9780141985756
N/A
Book picture is for illustrative purposes only, actual binding, cover or edition may vary.
This is a used book - there is no escaping the fact it has been read by someone else and it will show signs of wear and previous use. Overall we expect it to be in very good condition, but if you are not entirely satisfied please get in touch with us.