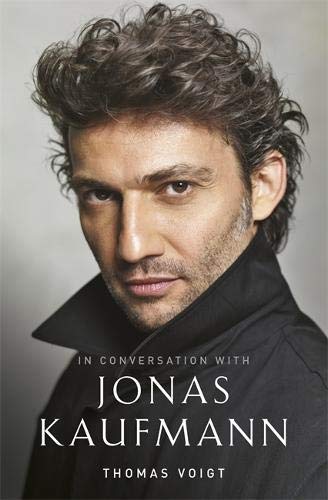 Jonas Kaufmann: In Conversation With by Thomas Voigt

'The most sought-after tenor in the world', the greatest tenor of today', 'the new king of tenors' - for years Jonas Kaufmann has occupied a unique status among the world's greatest opera singers.

Thomas Voigt's revealing biography, written in collaboration with Kaufmann, reflects on the singer's artistic development in recent years; his work in the recording studio; his relationship to Verdi and Wagner; and much more. The book includes contributions from Placido Domingo, Anja Harteros, Antonio Pappano, Helmut Deutsch and Jurgen Kesting, as well as many striking photographs.

Kaufmann was born in Munich in 1969. Soon after training at the University of Music and Performing Arts he was invited to make his debut in theatres such as the Stuttgart Opera and Hamburg State Opera, as well as international appearances at the Lyric Opera of Chicago, the Paris Opera and La Scala in Milan. He made his Salzburg Festival debut in 1999 in a new production of Busoni's Doktor Faust. He performed the role of Don Jose in Bizet's Carmen at Covent Garden in 2006 and made his acclaimed debut as Alfredo in Verdi's La Traviata at the Metropolitan Opera alongside Angela Gheorghiu. He has sung leading tenor roles in the operas of Richard Wagner with success in Germany and abroad, and is also a highly accomplished Lieder singer. In 2015 Kaufmann became the first German to perform the British seafaring anthem 'Rule, Britannia!' at the Last Night of the Proms.

No wonder that the New York Times has described Jonas Kaufmann as 'a box-office draw, and ... the most important versatile tenor of his generation'.

Mr Voigt's journalistic credentials are impeccable ... Mr Kaufmann goes into detail on the physical demands of his art; he speaks eloquently on the fear to which all singers are prone * The Economist *

Thomas Voigt is a freelance writer, journalist, filmmaker and vocal coach, born in 1960 in Hagen, Germany. From 1992 to 1996 he edited Opernwelt (Opera World) and from 1998 to 2003 was editor-in-chief of Fono Forum. He has published biographies of Martha Moedl, Inge Borkh and Edda Moser and made documentary films about Fritz Wunderlich, Lisa Della Casa, Elisabeth Schwarzkopf, Robert Stolz and Jonas Kaufmann. For his services to journalism he was awarded the Gottlob Frick Medal in Gold.

GOR008736694
Jonas Kaufmann: In Conversation With by Thomas Voigt
Thomas Voigt
Used - Very Good
Hardback
Orion Publishing Co
2017-11-09
272
1474604277
9781474604277
N/A
Book picture is for illustrative purposes only, actual binding, cover or edition may vary.
This is a used book - there is no escaping the fact it has been read by someone else and it will show signs of wear and previous use. Overall we expect it to be in very good condition, but if you are not entirely satisfied please get in touch with us.