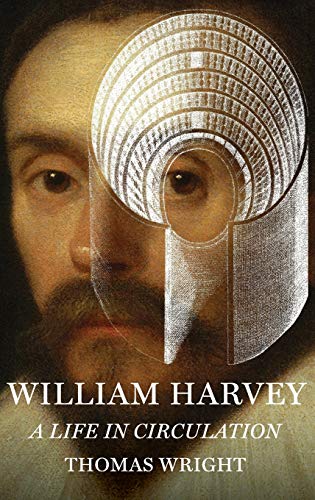 William Harvey: A Life in Circulation by Thomas Wright

In 1628, the English physician William Harvey published his revolutionary theory of blood circulation. Offering a radical conception of the workings of the human body and the function of the heart, Harvey's theory overthrew centuries of anatomical and physiological orthodoxy and had profound consequences for the history of science. It also had an enormous impact on culture more generally, influencing economists, poets and political thinkers, for whom the theory triumphed not as empirical fact but as a remarkable philosophical idea.

In the first major biographical study of Harvey in 50 years, Thomas Wright charts the meteoric rise of a yeoman's son to the elevated position of King Charles I's physician, taking the reader from farmlands of Kent to England's royal palaces, and paints a vivid portrait of an extraordinary mind formed at a fertile time in England's intellectual history. Set in late Renaissance London, the book features an illustrious cast of historical characters, from Francis Bacon and John Donne to Robert Fludd, whose corroboration of Harvey's ideas helped launch his circulation theory.
After he published his discoveries, Harvey became famous throughout Europe, where he demonstrated his theory through public vivisections. Although his ideas met with vociferous opposition, they eventually triumphed and Harvey became renowned as the only man in the history of natural philosophy to live to see a revolutionary theory gain wide currency. But just as intellectual ideas could be toppled, so too could kings. When Charles I was overthrown during the Civil War of the 1640s, his loyal court physician fell also, and Harvey, an unrepentant Royalist, was banished from London under the English Republic. He died in the late 1650s, a gout-ridden, melancholy man, uncertain of his achievement.

A victim of the political turmoil of the times, William Harvey was nevertheless the mainspring of vast historical changes in anatomy and physiology. Wright's biography skillfully repositions Harvey as a man who embodied the intellectual and cultural spirit of his age, and launched a revolution that would continue to run its course long after his death.

"[Wright] absolutely does justice to his subject. Bravo."--Vivienne Parry, The Times (London, England)
"Thomas Wright's acute, imaginative book..."--John Carey, Sunday Times
"In Circulation, Wright tells a good story, warts and all...Wright reconstructs the research...[and] is attentive to the world in which his subject lived. The semi-medieval conditions of life at the universities of Cambridge and Padua are well-described."--Duncan Wu, The Independent
"Thomas Wright's lucid biography deftly puts Harvey into his cultural context..."--Hermione Eyre, Prospect
"Thomas Wright's lively little book on Harvey's revolutionary idea is a panegyric to the man's whirring mind, and to the excitements of thinking more generally."--Helen Brown, The Daily Telegraph (4 stars)
"As soon as I started the book, I was gripped with curiosity."--William Leith, Spectator
"Thomas Wright's book opens brilliantly and bloodily and continues in the same vein...[A] captivating, intellectually gripping journey into our country's scientific past."--Druin Birch, Mail on Sunday
"A fascinating narration of a largely untold story."--Peter Ackroyd, British author
"[A] sprightly new study...Wright has written a concise, skillful and often eloquent book."--Charles Nicholl, The Guardian
"Wright's (Built of Books: How Reading Defined the Life of Oscar Wilde) 'biography of an idea as much as...of a man' presents a wonderful portrait not only of physician William Harvey but also of the changing face of the study of medicine and scientific inquiry in Europe in the early 17th century...Other essays muse on broader cultural concepts such as metaphorical understandings of the heart and the extension of Harvey's ideas even beyond where he himself was comfortable. Wright pulls these threads together to create an enjoyably enlightening history of science, with more than enough background included to make this worthwhile for a general academic audience."--Publisher's Weekly, starred review
"'The little man of 'perpetual movement' has found a fine advocate in Thomas Wright, whose highly readable "Circulation" combines recent scholarship with more than a touch of drama..."--Helen Bynum, The Times Literary Supplement
"Using the doctor's surviving notes and letters as well as other contemporary sources, Wright convincingly re-creates William Harvey's England. The book's evocations of his boyhood education and college experiences give the later opposition to his theories a clearer context, and will convince readers that Harvey's concept of the heart changed people's perception of the world."--Booklist
"Wright offers an excellent account of Harvey's researches on the heart and circulation, but the real payoff comes from his reconstructions of events in Harvey's life: his days as a student in Cambridge and Padua, his medical practice, or his efforts to defend his work against critics. Wright paints a vivid picture..."--Bill Bynum, The Lancet
"This remarkable book represents the best in historical detective work. Wright pieces together what remains of a fragmented documentary record, providing a brilliant interpretation and thorough consideration of the period in which William Harvey (1578-1657) lived."--CHOICE

Thomas Wright is the author of Built of Books: How Reading Defined the Life of Oscar Wilde, and of numerous articles for publications such as the Times Literary Supplement and the Independent. He is based in Italy and Oxford, where he teaches.

GOR010242523
William Harvey: A Life in Circulation by Thomas Wright
Thomas Wright
Used - Very Good
Hardback
Oxford University Press Inc
2012-10-12
288
0199931690
9780199931699
N/A
Book picture is for illustrative purposes only, actual binding, cover or edition may vary.
This is a used book - there is no escaping the fact it has been read by someone else and it will show signs of wear and previous use. Overall we expect it to be in very good condition, but if you are not entirely satisfied please get in touch with us.