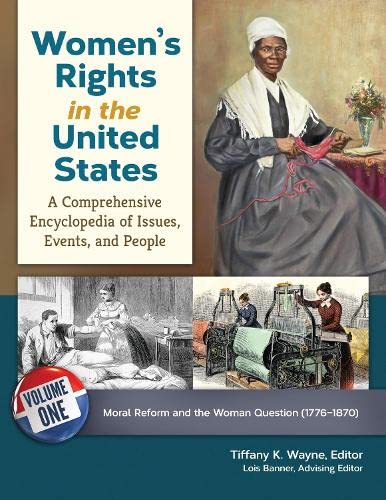 A comprehensive encyclopedia tracing the history of the women's rights movement in the United States from the American Revolution to the present day.

Women's Rights in the United States [4 volumes]: A Comprehensive Encyclopedia of Issues, Events, and People by Tiffany K. Wayne, PhD

A comprehensive encyclopedia tracing the history of the women's rights movement in the United States from the American Revolution to the present day.

Few realize that the origin of the discussion on women's rights emerged out of the anti-slavery movement of the 19th century, and that suffragists were active in the peace and labor movements long after the right to vote was granted. Thus began the confluence of activism in our country, where the rights of women both followed-and led-the social and political discourse in America. Through 4 volumes and more than 800 entries, editor Tiffany K. Wayne, with advising editor Lois Banner, examine the issues, people, and events of women's activism, from the early period of American history to the present time. This comprehensive reference not only traces the historical evolution of the movement, but also covers current issues affecting women, such as reproductive freedom, political participation, pay equity, violence against women, and gay civil rights.

"One may be tempted to read a volume cover to cover, although the set's purpose as a research source is clear." - Booklist
"This important work provides an update and is much more comprehensive in its scope than other comparable works. . . . Summing Up: Highly recommended. Undergraduates through faculty and researchers; general readers and professionals." - Choice
"This is one of the best and most comprehensive encyclopedias on this subject or many others that this reviewer has ever seen. . . . [H]ighly recommend for all types of school, academic, public or special libraries as well as any reader who wants a superb resource on women's rights in the USA." - Reference Reviews

Tiffany K. Wayne, PhD, is author of ABC-CLIO's American Women of Science since 1900 and Greenwood's Women's Roles in Nineteenth-Century America.

Lois Banner, PhD, is history professor at the University of Southern California and an American feminist author.

GOR010659680
9781610692144
1610692144
Women's Rights in the United States [4 volumes]: A Comprehensive Encyclopedia of Issues, Events, and People by Tiffany K. Wayne, PhD
Tiffany K. Wayne, PhD
Used - Good
Hardback
ABC-CLIO
2014-12-09
1361
Winner of 2015 Outstanding Academic Title 2016 (United States) Winner of 2015 Outstanding Reference Source 2016 (United States)
Book picture is for illustrative purposes only, actual binding, cover or edition may vary.
This is a used book - there is no escaping the fact it has been read by someone else and it will show signs of wear and previous use. Overall we expect it to be in very good condition, but if you are not entirely satisfied please get in touch with us
Trustpilot