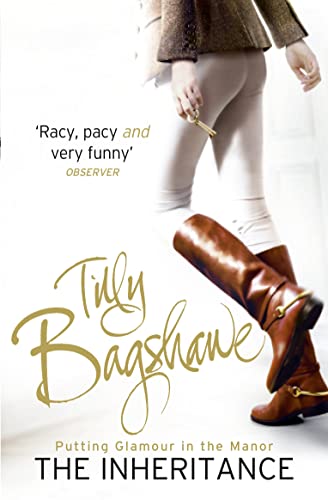 The Inheritance
by Tilly Bagshawe

Welcome to Tilly Bagshawe's Swell Valley, where the scandal is in a class of its own.

Welcome to Tilly Bagshawe's Swell Valley, where the scandal is in a class of its own.

Tatiana Flint-Hamilton's gilded cage is torn away when her estranged father dies. As the beloved family estate slips through Tati's fingers, the portraits of her ancestors look down disapprovingly.

The new Lord of the Manor is just as ruthless as Tati. The old-world status of Furlings is everything the wealthy, self-made Brett Cranley has ever wanted. Luckily his wife Angela is the perfect homemaker, happy to fall into line with whatever Brett desires. Along with her two children, Furlings soon becomes Angela's lifeline, a place she can finally belong. And one she's not going to give up easily.

Losing everything has made Tati realise that her rightful inheritance is all that she now lives for... and she will do anything to get it back.

But the fate of Furlings lies in the hands of the villagers.

`Full of scandal, sex and secrets, all of which combine to keep you hooked till the very end' Closer

`A cross between Jilly Cooper and Jackie Collins' Daily Mail

'You're always guaranteed a corking characters and a fast-paced read with a Bagshawe story, and this doesn't disappoint' Heat

`The queen of chick-lit' Woman's Own

`A cut above the rest... Pure, unadulterated escapism." Fabulous

A single mother at seventeen, Tilly won a place at Cambridge University and took her baby daughter with her. Now married to an American and a mother of four, Tilly and her family divide their time between the bright lights of Los Angeles and the peace and tranquility of a sleepy Cotswold village

Before her first book, Adored, became an international smash hit, Tilly had a successful career in the City. Later, as a journalist, she contributed regularly to the Sunday Times, Daily Mail and Evening Standard before turning her hand to novels, following in the footsteps of her sister Louise. These days, whenever she's not writing or on a plane, Tilly's life mostly revolves around the school run, boy scouts and Peppa Pig.

GOR005706156
The Inheritance (Swell Valley Series, Book 1) by Tilly Bagshawe
Tilly Bagshawe
Swell Valley Series
Used - Very Good
Paperback
HarperCollins Publishers
2014-06-19
528
000747251X
9780007472512
N/A
Book picture is for illustrative purposes only, actual binding, cover or edition may vary.
The book has been read but remains in clean condition. All pages are intact and the cover is intact. Some minor wear to the spine.