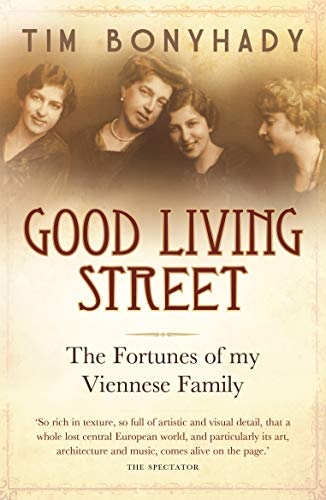 Used Price
$35.99
inc. GST
Free Shipping in Australia
The dazzling tale of an extraordinary family who were connected to the greatest figures of their age before the Nazi Anschluss forced them to flee their privileged life in Vienna.
Reviews:
Trustpilot
Very Good Well Read

Good Living Street: The fortunes of my Viennese family by Tim Bonyhady

In 1900 Vienna was one of the most exciting places to live in the world. Its glamorous high society was the envy of Europe, and it was the centre of an exploding arts movement that set the tone for the following century.

In Good Living Street Bonyhady follows the lives of three generations of women in his family in an intimate account of fraught relationships, romance, and business highs and lows. They enjoyed a lifestyle of unimaginable luxury and privilege until the rise of Nazism made their existence in Austria untenable.

In 1938, as Kristallnacht was raging, his family fled Vienna for a small flat in Australia, taking with them the best private collection of art and design to escape the Nazis. As they remade their lives as refugees, the past was rarely discussed and fifty years passed before Tim discovered the remarkable arc of his family's fortunes.

A glittering family saga of privilege and tragedy. * Sunday Telegraph *
So rich in texture, so full of artistic and visual detail, that a whole lost central European world, and particularly its art, architecture and music, comes alive on the page. * The Spectator *
A captivating tour-de-force. * Art Monthly *
[Good Living Street] tells a riveting three-generational family story without sentimentality that, because of the meticulousness of the research, displays a whole society to us, with habits, lifestyles, attitudes and aspirations so different from ours... It is essentially an essay on the human spirit, with all its angularities and complexities. * Australian Literary Review *

Tim Bonyhady is an art historian and environmental lawyer. Since 2004 he has been director of the Australian Centre for Environmental Law at the Australian National University. His many books include Images in Opposition: Australian Landscape Painting 1801-1890, Places Worth Keeping, Conservationists, Politics and Law and The Colonial Earth which won the NSW Premier's Prize for Australian History and the Queensland Premier's Prize for History. In 2013 he will be a Visiting Fellow at Trinity College, Cambridge.

GOR005373555
Good Living Street: The fortunes of my Viennese family by Tim Bonyhady
Tim Bonyhady
Used - Very Good
Paperback
Allen & Unwin
2013-06-06
464
174331146X
9781743311462
N/A
Book picture is for illustrative purposes only, actual binding, cover or edition may vary.
This is a used book - there is no escaping the fact it has been read by someone else and it will show signs of wear and previous use. Overall we expect it to be in very good condition, but if you are not entirely satisfied please get in touch with us.