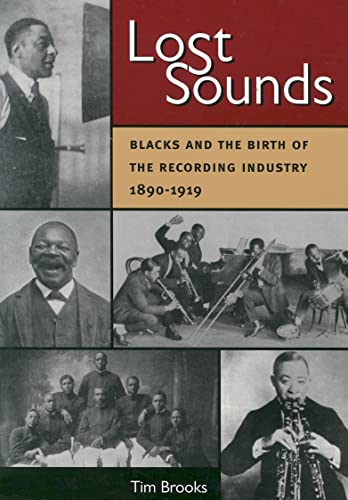 Used Price
$93.99
inc. GST
Free Shipping in Australia
Features the history of the involvement of African Americans in the early recording industry and examines the first three decades of sound recording in the United States, charting the surprising roles black artists played in the period leading up to the Jazz Age and the remarkably wide range of black music and culture they preserved.
Reviews:
Trustpilot
Like New

Lost Sounds: Blacks and the Birth of the Recording Industry, 1890-1919 by Tim Brooks

"An act of cultural reclamation--the great lost heroes of black performance."--New York Times
"Brooks brings both passion and compassion to the story of the black pioneers who worked as performers and entrepreneurs in the nascent U.S. recording industry."--Business History Review
"The authors are ardent scholars . . . the thorough bibliography demonstrates the scope and intensity of the research. This is a welcome contribution to the literature on the African American story, primarily in music but in other disciplines as well."--Choice
"Lost Sounds is a thrilling book; it is rare to encounter a work of this length that supplies so much new information, causing us to reevaluate and reinterpret our understanding of American music and social history."--Current Musicology
"A monumental achievement in research and sheds light on overlooked aspects of turn-of-the-century popular culture."--Technology and Culture
"Tim Brooks has drawn on a staggering array of primary sources to create this wonderful compendium of information. Lost Sounds makes a significant contribution to the field."--Norm Cohen, author of Traditional Anglo-American Folk Music: An Annotated Discography of Published Recordings
"Brooks has uncovered a wealth of fascinating detail about the record business, its artists, and the range of music they recorded 100 years ago. This engaging work of thorough scholarship is essential reading for anyone interested in the birth of commercial recording and African American music in the early part of the 20th century."--Samuel Brylawski, Head, Recorded Sound Section, Library of Congress

Tim Brooks is Executive Vice President of Research at Lifetime Television. He is the author of Little Wonder Records: A History and Discography and other books, as well as past president of the Association for Recorded Sound Collections. Dick Spottswood is a freelance author, broadcaster, and record producer. He is the author of the seven-volume reference work, Ethnic Music on Records.

GOR011099336
Lost Sounds: Blacks and the Birth of the Recording Industry, 1890-1919 by Tim Brooks
Tim Brooks
Music in American Life
Used - Like New
Paperback
University of Illinois Press
2005-07-08
656
025207307X
9780252073076
N/A
Book picture is for illustrative purposes only, actual binding, cover or edition may vary.
The book has been read, but looks new. The book cover has no visible wear, and the dust jacket is included if applicable. No missing or damaged pages, no tears, possible very minimal creasing, no underlining or highlighting of text, and no writing in the margins.