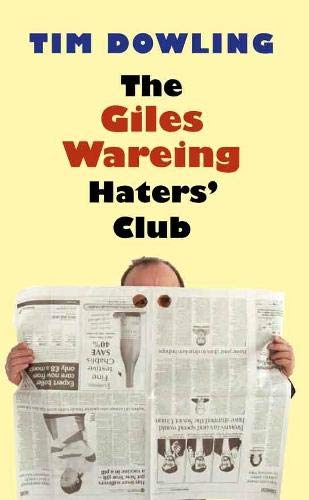 Out of Stock
$20.49
inc. GST
What do you do when your nice, run-of-the-mill midlife crisis is interrupted by something much more terrifying?
Very Good
Only 0 left

Giles Wareing has started telling people he's forty, even though he's actually thirty-nine years and eleven months. It's supposed to help him conquer the fear, but in fact he has only given the fear a four-week head start. Giles is a freelance writer for a national newspaper - amusing articles about the VHS-Betamax `format war' of the late 1970s; the origins of the word `derring-do'; the history of the 1804 silver dollar. He lives in West London with his wife, Caroline, and their two boys. Caroline and Giles's communication these days is mostly limited to statements of (unwelcome) fact: `There is something wrong with the dishwasher.' `The shed leaks.' `The microwave is broken.'

So far, so midlife crisis. Until two things happen. First: Giles gets gout. Or what he thinks is gout. And second: one day, feeling particularly fortyish, he happens to type `Giles Wareing+unfunny' into a search engine. And that's when he discovers the thread. The thread is called `The Giles Wareing Haters' Club', and is entirely devoted to holding everything he has ever written up to excoriating criticism and ridicule - a place that has hitherto existed only in Giles's most speculative nightmares.

As Giles becomes obsessed with the thread, with tracking down its participants in order to . . . well, set them straight on a few things, his angst begins to focus on one member of TGWHC: a woman he knows only by the name Salome66 - a woman whose spite begins to take on a bewitching quality even to its wretched object. And when Giles goes on a radio show to discuss his gout but breaks down in sobs live on air, it's only the first sign that things are going really quite badly wrong . . .

A tragedy, a farce and a detective story, The Giles Wareing Haters' Club is an absorbing, hilarious and razor-sharp look at the modern male in all his dysfunctional glory.

Tim Dowling was born in Connecticut in 1963. He attended Brien McMahon High School and graduated from Middlebury College in 1985. Shortly after moving to Britain in the early 90s he cut short a promising career in data entry to try his luck at freelance writing. Over time he eventually became unfit for any other form of employment. He now writes regularly for the Guardian and the Daily Telegraph Magazine. He is also the author of the Not the Archer Prison Diary and a biography of King Camp Gillette entitled Inventor of Disposable Culture. He lives in London with his wife and three sons.

GOR001061563
The Giles Wareing Haters' Club by Tim Dowling
Tim Dowling
Used - Very Good
Hardback
Pan Macmillan
2007-06-01
304
0330446169
9780330446167
N/A
Book picture is for illustrative purposes only, actual binding, cover or edition may vary.
This is a used book - there is no escaping the fact it has been read by someone else and it will show signs of wear and previous use. Overall we expect it to be in very good condition, but if you are not entirely satisfied please get in touch with us.