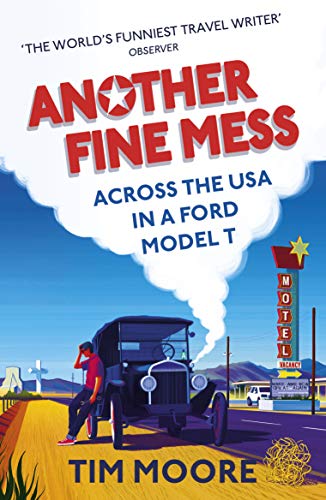 Another Fine Mess
by Tim Moore

Another Fine Mess by Tim Moore

Lacking even the most basic mechanical knowhow, Tim Moore sets out to cross Trumpland USA in an original Model T Ford. Armed only with a fan belt made of cotton, wooden wheels and a trunkload of 'wise-ass Limey liberal gumption', his route takes him exclusively through Donald-voting counties, meeting the everyday folks who voted red along the way.

He meets a people defined by extraordinary generosity, willing to shift heaven and earth to keep him on the road. And yet, this is clearly a nation in conflict with itself: citizens 'tooling up' in reaction to ever-increasing security fears; a healthcare system creaking to support sugar-loaded soda lovers; a disintegrating rust belt all but forgotten by the warring media and political classes.

With his trademark blend of slapstick humour, affable insight and butt-clenching peril, Tim Moore invites us on an unforgettable road trip through America. Buckle up!

An easy and enjoyable read, it's as much about the roadtrip in a vintage car as it is observations on the current political climate in America * Classic Ford *
Moore... [is] very good at soaking up the strangeness of America and relating it to readers with an easy-going observational humour that only threatens to desert him when he contemplates the excesses of the current administration -- Alistair Mabbott * The Herald *
Hilarious and scary often in equal measure -- Nat Barnes * Daily Express *
This is The Wizard of Oz in reverse - an attempt to uncover the source of what went wrong in America... What lingers is the stories of communities brimming with people who worked like dogs to learn a trade in a country they believed would reward them -- Jane Graham * Big Issue *
Alarmingly full of incident, very funny - even mildly transformative -- Jane Shilling * Daily Mail *

Tim Moore's writing has appeared in the Daily Telegraph, the Observer, the Sunday Times and Esquire. He is the author of Gironimo!, French Revolutions, Do Not Pass Go, Spanish Steps, Nul Points, I Believe In Yesterday and You Are Awful (But I Like You). He lives in London.

GOR009896159
Another Fine Mess by Tim Moore
Tim Moore
Used - Very Good
Paperback
Vintage Publishing
2013-07-30
368
1787290298
9781787290297
N/A
Book picture is for illustrative purposes only, actual binding, cover or edition may vary.
This is a used book - there is no escaping the fact it has been read by someone else and it will show signs of wear and previous use. Overall we expect it to be in very good condition, but if you are not entirely satisfied please get in touch with us.