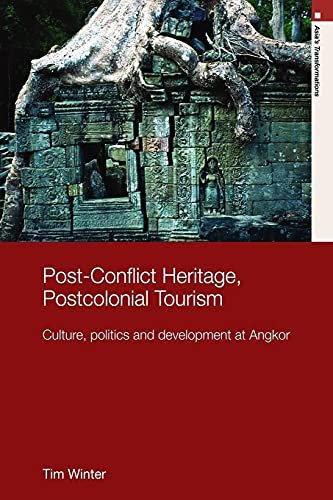 Angkor, Cambodia's only World Heritage Site, is enduring one of the most crucial, turbulent periods in its twelve hundred year history. Given Cambodia's need to restore its shattered social and physical infrastructures after decades of violent conflict, and with tourism to Angkor increasing by a staggering 10,000 per cent in just over a decade, the site has become an intense focal point of competing agendas. Angkor's immense historical importance, along with its global prestige, has led to an unprecedented influx of aid, with over twenty countries together donating millions of dollars for conservation and research. For the Royal Government however, Angkor has become a `cash-cow' of development.

Post-conflict Heritage, Postcolonial Tourism critically examines this situation and locates Angkor within the broader contexts of post-conflict reconstruction, nation building, and socio-economic rehabilitation. Based on two years of fieldwork, the book explores culture, development, the politics of space, and the relationship between consumption, memory and identity to reveal the aspirations and tensions, anxieties and paradoxical agendas, which form around a heritage tourism landscape in a post-conflict, postcolonial society.

With the situation in Cambodia examined as a stark example of a phenomenon common to many countries attempting to recover after periods of war or political turmoil, Post-conflict Heritage, Postcolonial Tourism will be of particular interest to students and scholars working in the fields of Asian studies, tourism, heritage, development, and cultural and postcolonial studies.

'This is a text that should grace the shelves of all those interested not only in heritage tourism but in the processes and dynamics of tourism development more broadly. Indeed, the level of theoretical analysis and the dissection of issues in a post-conflict, post-colonial environment reaches a high standard of excellence.' - Trevor Sofield, University of Tasmania, Australia, Journal of Heritage Tourism, Vol. 4, No. 4, November 2009

Tim Winter is based at the University of Sydney researching heritage and tourism in Asia. Having published widely on Angkor, he is editor of Expressions of Cambodia: the politics of tradition, identity and change (Routledge 2006), and Asia on Tour: exploring the rise of Asian Tourism, (Routledge, 2008). He is also editor of the ICOMOS journal Historic Environment.

1. From a Time of Conflict to Conflicting Times 2. `Lost Civilization' to Free-Market Commerce: the Modern Social Life of Angkor 3. World Heritage Angkor 4. Remapping Angkor; from Landscape to Touristscape(s) 5. Angkor in the Frame 6. Collapsing Policies and Ruined Dreams 7. Conclusion - In (the) Place of Modernity Appears the Illusion of History

GOR010194304
Post-Conflict Heritage, Postcolonial Tourism: Tourism, Politics and Development at Angkor by Tim Winter
Tim Winter
Routledge Studies in Asia's Transformations
Used - Very Good
Paperback
Taylor & Francis Ltd
2011-06-23
200
0415689589
9780415689588
N/A
Book picture is for illustrative purposes only, actual binding, cover or edition may vary.
This is a used book - there is no escaping the fact it has been read by someone else and it will show signs of wear and previous use. Overall we expect it to be in very good condition, but if you are not entirely satisfied please get in touch with us.