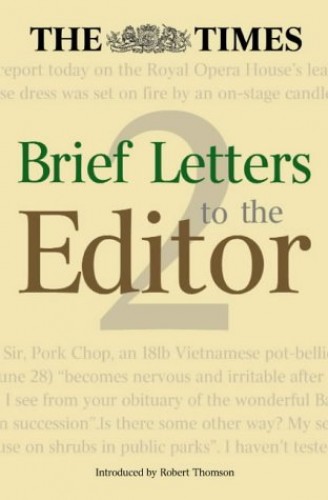 The Times Brief Letters to the Editor Book 2

The Times Brief Letters to the Editor Book 2 Summary

An new collection of the wittiest letters printed on The Times letters page: not sightings of first cuckoos and maunderings of retired civil servants, but pithy, funny and sometimes startling observations on topics from natural history to politics, and from sport and the arts to crime and punishment. With an introduction by The Times editor Robert Thomson, and illustrated with cartoons by Neil Bennett

Sir, Your report today on the Royal Opera House's leading lady whose dress was set on fire by an on-stage candle is a classic case of it ain't over till the fat lady singes.
Yours faithfully

Sir, I see from your obituary of the wonderful Barbara Goalen that she "produced two children in succession".
Is there some other way?
Yours faithfully

Sir, My secateurs, made in China carry the instruction "ideal for use on shrubs in public parks".
I haven't tested them in situ yet.
Yours

Sir, The captain of HMS Nottingham should be treated leniently. On BBC News, on teletext and in your paper today, Wolf Rock at Lord Howe Island has been variously described as being 200, 300, 400 and 500 miles from Sydney. Clearly the wretched thing is mobile and its position unpredictable.
Yours faithfully

Sir, I once had a bottle of embrocation from China (letters, July 3 and 8) bearing the warning "Do not take inside".
We kept it in the garage.
Yours faithfully,

Sir, In view of recent financial excesses, are these the Naughty Noughties?
Regards,

GOR002628840
The Times Brief Letters to the Editor Book 2 by
Used - Very Good
Hardback
HarperCollins Publishers
2003-12-01
192
0007166478
9780007166473
N/A
Book picture is for illustrative purposes only, actual binding, cover or edition may vary.
This is a used book - there is no escaping the fact it has been read by someone else and it will show signs of wear and previous use. Overall we expect it to be in very good condition, but if you are not entirely satisfied please get in touch with us.