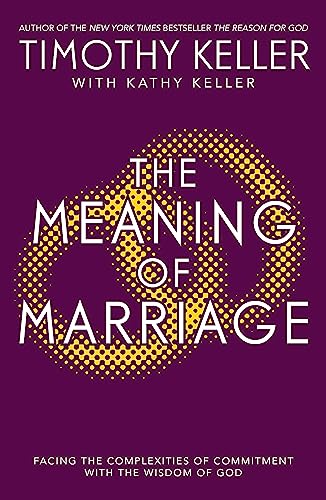 The Meaning of Marriage
by Timothy Keller

Out of Stock
$21.49
inc. GST
The latest book from the New York Times bestselling author of THE REASON FOR GOD
Like New
Only 0 left

The Meaning of Marriage Summary

The Meaning of Marriage: Facing the Complexities of Marriage with the Wisdom of God by Timothy Keller

In previous books respected New York pastor and bestselling author Timothy Keller has looked at such diverse and topical subjects as the existence of God, our need to do justice, the meaning of Jesus' life, and the human temptation to make idols - all through the twin lenses of a biblical framework and an engagement with contemporary culture.
In this new book, co-authored with his wife, Kathy, he turns his attention to that most complex of matters: our need for love, and its expression in marriage. Beginning with the biblical narrative, and its pictures of marriage that span the original ideal to the broken to the redemptive, he looks at themes of friendship and commitment; the completion of men and women in each other; singleness, sex and divorce; and ministry and discipleship within the context of marriage. This is a profound and engaging work that will challenge and inspire people in all stages of life - single, newlywed and married.

The Meaning of Marriage Reviews

This is a book Christians need to read * The Christian Post *
The rare marriage book I would heartily recommend to any single, no matter his or her age, whether dating, courting, engaged, or disinterested ... Rich and practical. * The Gospel Coalition *
Fifty years from now, if evangelical Christians are widely known for their love of cities, their commitment to mercy and justice, and their love of their neighbors, Tim Keller will be remembered as a pioneer of the new urban Christians. * Christianity Today magazine *
Tim Keller's ministry in New York City is leading a generation of seekers and skeptics toward belief in God. I thank God for him. * Billy Graham *
Do you ever feel or think that your marriage could do with a make-over? Have you read all the books? Been to marriage-enrichment weekends? Still want help and answers? Look no further - Timothy Keller has the answers, if you are serious about your relationship with the Godhead, Father, Son and Holy Spirit....This is the very best book that I have read on marriage. -- Rosemary Rowe * Woman Alive *

Timothy Keller was born in Pennsylvania and educated at Bucknell University, Gordon-Conwell Theological Seminary, and Westminster Theological Seminary. He became a Christian at university, was ordained by the Presbyterian Church in America and worked as a pastor for nine years. He was asked to start Redeemer Presbyterian Church in Manhattan in 1989, and under his leadership the church's congregation experienced unprecedented growth from 50 to 5,000 members. His target audience consists mainly of urban professionals, whom he believes exhibit disproportionate influence over the culture and its ideas. The 'Influentials' Issue of New York Magazine featured Dr. Keller as "the most successful Christian evangelist in the city by recognizing that young professionals and artists are 'disproportionately influential' in creating the country's culture and that you have to meet this coveted demographic on its own terms." Timothy Keller is renowned for his clear, reasoned approach to Christian apologetics and his book THE REASON FOR GOD: BELIEF IN AN AGE OF SCEPTICISM was named Book of the Year for 2008 by World Magazine. Timothy Keller lives in New York City with his wife Kathy and sons David, Michael and Jonathan.

GOR009019898
The Meaning of Marriage: Facing the Complexities of Marriage with the Wisdom of God by Timothy Keller
Timothy Keller
Used - Like New
Paperback
Hodder & Stoughton
2013-08-29
288
1444702165
9781444702163
N/A
Book picture is for illustrative purposes only, actual binding, cover or edition may vary.
This is a used book - there is no escaping the fact it has been read by someone else and it will show signs of wear and previous use. Overall we expect it to be in very good condition, but if you are not entirely satisfied please get in touch with us.