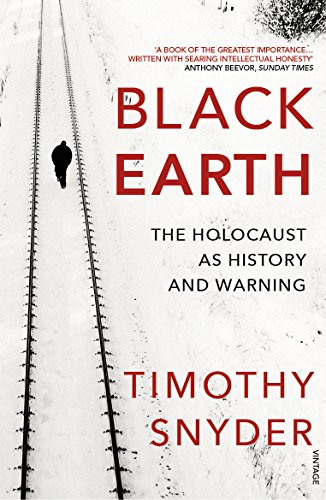 In Stock
$23.49
inc. GST
LONGLISTED FOR THE 2015 SAMUEL JOHNSON PRIZE We have come to see the Holocaust as a factory of death, organised by bureaucrats. But as Timothy Snyder shows, we have missed basic lessons of the history of the Holocaust, and some of our beliefs are frighteningly close to the ecological panic that Hitler expressed in the 1920s.
Like New Very Good Good
Only 1 left

Black Earth: The Holocaust as History and Warning by Timothy Snyder

LONGLISTED FOR THE 2015 SAMUEL JOHNSON PRIZE We have come to see the Holocaust as a factory of death, organised by bureaucrats. Yet by the time the gas chambers became operation more than a million European Jews were already dead: shot at close range over pits and ravines. They had been murdered in the lawless killing zones created by the German colonial war in the East, many on the fertile black earth that the Nazis believed would feed the German people. It comforts us to believe that the Holocaust was a unique event. But as Timothy Snyder shows, we have missed basic lessons of the history of the Holocaust, and some of our beliefs are frighteningly close to the ecological panic that Hitler expressed in the 1920s. As ideological and environmental challenges to the world order mount, our societies might be more vulnerable than we would like to think. Timothy Snyder's Bloodlands was an acclaimed exploration of what happened in eastern Europe between 1933 and 1945, when Nazi and Soviet policy brought death to some 14 million people. Black Earth is a deep exploration of the ideas and politics that enabled the worst of these policies, the Nazi extermination of the Jews. Its pioneering treatment of this unprecedented crime makes the Holocaust intelligible, and thus all the more terrifying.

"Timothy Snyder's bold new approach to the Holocaust links Hitler's racial worldview to the destruction of states and the quest for land and food. This insight leads to thought-provoking and disturbing conclusions for today's world. Black Earth uses the recent past's terrible inhumanity to underline an urgent need to rethink our own future" -- Ian Kershaw
"A wholly readable and utterly persuasive attempt to get us to look at the Holocaust in a different light. I read it twice, aghast but gripped by the moral abyss into which I was plunged on each page" * Observer *
"Black Earth is provocative, challenging, and an important addition to our understanding of the Holocaust. As he did in Bloodlands, Timothy Snyder makes us rethink those things we were sure we already knew" -- Deborah Lipstadt
"Part history, part political theory, Black Earth is a learned and challenging reinterpretation" -- Henry A. Kissinger
"In this unusual and innovative book, Timothy Snyder takes a fresh look at the intellectual origins of the Holocaust, placing Hitler's genocide firmly in the politics and diplomacy of 1930s Europe. Black Earth is required reading for anyone who cares about this difficult period of history" -- Anne Applebaum

`When Timothy Snyder's book Bloodlands: Europe Between Hitler and Stalin was published in 2010, it quickly established its author as one of the leading historians of his generation, a scholar who combined formidable linguistic skills - he reads or speaks 11 languages - with an elegant literary style, white-hot moral passion and a willingness to start arguments about some of the most fraught questions of the recent past.' New York Times Timothy Snyder is Levin Professor of History at Yale University, and has written and edited a number of critically acclaimed and prize-winning books about twentieth-century European history: Bloodlands won the Hannah Arendt Prize, the Leipzig Book Prize for European Understanding, the Ralph Waldo Emerson Award in the Humanities and the literature award of the American Academy of Arts and Letters. Black Earth was longlisted for the Samuel Johnson Prize. Snyder is a frequent contributor to the New York Review of Books and the Times Literary Supplement. He is a member of the Committee on Conscience of the United States Holocaust Memorial Museum, a permanent fellow of the Institute for Human Sciences, and sits on the advisory council of the Yivo Institute for Jewish Research.

GOR008502329
Black Earth: The Holocaust as History and Warning by Timothy Snyder
Timothy Snyder
Used - Like New
Paperback
Vintage Publishing
2016-03-17
480
1784701483
9781784701482
Long-listed for Samuel Johnson Prize 2015 (UK)
Book picture is for illustrative purposes only, actual binding, cover or edition may vary.
This is a used book - there is no escaping the fact it has been read by someone else and it will show signs of wear and previous use. Overall we expect it to be in very good condition, but if you are not entirely satisfied please get in touch with us.