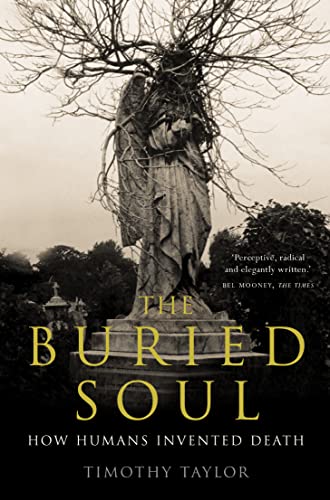 The Buried Soul by Timothy Taylor

From the author of 'The Prehistory of Sex' - a coruscating, insightful history of the human soul.

The Buried Soul: How Humans Invented Death by Timothy Taylor

From the author of 'The Prehistory of Sex' - a coruscating, insightful history of the human soul.

Cannibals, burials, vampires, human sacrifice, bog people - throughout history our ancestors have responded to death in numerous ways. The past has left us numerous relics of these encounters between the dead and those they leave behind: accounts of sacrifices in early histories, rituals that have stood the test of time, bodies discovered in caves and bogs, remains revealed by archaeological digs.

Through these insights into the past, Tim Taylor pieces together evidence of how our ancestors created their universe and asks how we have dealt with the idea of the end and slowly come to create not only a sense of the afterlife but also the soul.

Tim Taylor's investigation from the earliest remains of burial to funeral rituals in 9th-century Steppes and the mummification of Lenin in Moscow, is a breathtaking combination of research, insight and scholarship that has profound resonance today.

Combining history, archaeology, philosophy, cutting edge science and autobiography, 'The Buried Soul' is a radical and unique adventure into the sepulchral world. Constantly illuminating and insightful, it is not only a fascinating investigation into popular science but also a thought-provoking and discursive examination of ourselves.

'Perceptive, radical and elegantly written. His quest for answers takes us on an extraordinary journey, like time travellers in the boneyards of history...All this is achieved with the style of a consummate storyteller.' Bel Mooney, The Times

'Like a thriller-writer he deploys cliff-hanging chapter endings. Like a good novelist he is unafraid of human emotion. As an archaeologist he knows how to sort and wash bones. As a thinker he restores dignity to these unnamed bodies by holding them compassionately with his words.' Michele Roberts, Independent on Sunday

'Sit back and revel in this riveting exploration of our collective ancestral psyche.' Sunday Herald

Timothy Taylor is a lecturer in Archaeology at the University of Bradford and a Fellow of the Society of Antiquaries (FSA). His previous book THE PREHISTORY OF SEX was high acclaimed in the UK, Europe and US. He has worked on numerous television projects including CANNIBAL (Channel 4).

GOR005512027
The Buried Soul: How Humans Invented Death by Timothy Taylor
Timothy Taylor
Used - Very Good
Paperback
HarperCollins Publishers
2008-07-01
368
0007291477
9780007291472
N/A
Book picture is for illustrative purposes only, actual binding, cover or edition may vary.
This is a used book - there is no escaping the fact it has been read by someone else and it will show signs of wear and previous use. Overall we expect it to be in very good condition, but if you are not entirely satisfied please get in touch with us
Trustpilot