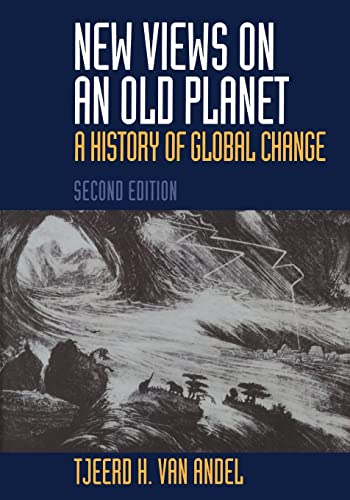 New Views on an Old Planet
by Tjeerd H.Van Andel

In Stock
$22.99
inc. GST
In this revised 1994 edition of his award-winning book on the Earth's history, Professor van Andel updates and expands his earlier text drawing on a wealth of new knowledge. In concise and compelling prose, this book provides a historical account of the global change.
Very Good
5 in stock

New Views on an Old Planet by Tjeerd H.Van Andel

In this 1994 revised edition of his award-winning book on the Earth's history, Professor van Andel updates and expands his earlier text, drawing on a wealth of new knowledge that has become available in the last decade. This book examines the major changes in the Earth's history - the evolution of the solid Earth, the changing oceans and atmospheres and the progression of life - to render a historical account of the Earth's evolution. Much knowledge was gained in the previous decade, and while little material has been deleted, this new edition has grown to cover the key topics, including a chapter on how we can improve our grasp on geological time. Mindful of the current interest in global change, new sections describe the green-house effect and address its possible future ramifications. In prose that is both concise and compelling, New Views on an Old Planet: A History of Global Change makes Earth history appealing to the general reader. It will serve as an excellent text for introductory courses in the earth and environmental sciences.

Part I. Foundations: 1. Reading the record of the rocks; 2. Perspective on time; Part II. Climate Past and Present: The Ice Age: 3. Climate and climate change; 4. Portrait of an ice age; 5. Explaining glaciations; Part III. Drifting Continents, Rising Mountains: 6. Continental drift and plate tectonics; 7. Continental breakup and continental drift; 8. Converging plates and colliding continents; Part IV. Changing Oceans, Changing Climates: 9. The sea comes in, the sea goes out; 10. Other times and other oceans; 11. Onward to the ice age; 12. A matter of rhythm; Part V. The Four-Billion-Year Childhood: 13. Birth of the solid earth; 14. Water for the sea, air for the atmosphere; 15. The dawn of life; Part VI. Life, Time and Change: 16. Beyond Darwin; 17. Bones of our ancestors; 18. Evolution and environment; 19. Crises and catastrophes.

GOR002248259
New Views on an Old Planet by Tjeerd H.Van Andel
Tjeerd H.Van Andel
Used - Very Good
Paperback
Cambridge University Press
1994-10-28
458
0521447550
9780521447553
N/A
Book picture is for illustrative purposes only, actual binding, cover or edition may vary.
This is a used book - there is no escaping the fact it has been read by someone else and it will show signs of wear and previous use. Overall we expect it to be in very good condition, but if you are not entirely satisfied please get in touch with us.