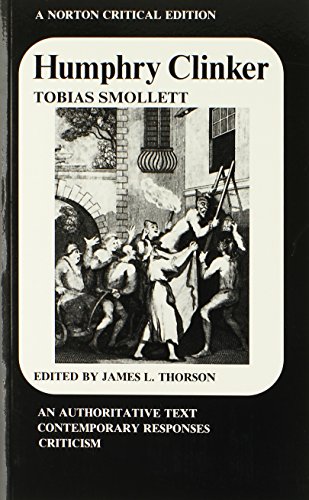 In Stock
$11.99
+10% GST
The text of this edition of one of the finest and funniest epistolary novels is taken from the first edition of 1771 and includes the illustrations that Thomas Rowlandson added to the novel in 1790-93.
Very Good Good
Only 1 left

A few obvious typographical errors have been corrected, but Smollett's creative misspellings in the letters of Tabitha Bramble and the inimitable Win Jenkins have been retained with all of their comically earthy overtones.

"Contemporary Responses" to the controversial Smollett's last novel are provided by a series of reviews that appeared on the English scene immediately after its publication. A letter from a friend to the author on the novel's publication is also included.

The volume also contains a selective Bibliography of works on Smollett and on Humphry Clinker in particular.

GOR003250024
Humphry Clinker by Tobias Smollett
Tobias Smollett
Norton Critical Editions
Used - Very Good
Paperback
WW Norton & Co
1983-05-17
464
0393952835
9780393952834
N/A
Book picture is for illustrative purposes only, actual binding, cover or edition may vary.
This is a used book - there is no escaping the fact it has been read by someone else and it will show signs of wear and previous use. Overall we expect it to be in very good condition, but if you are not entirely satisfied please get in touch with us.