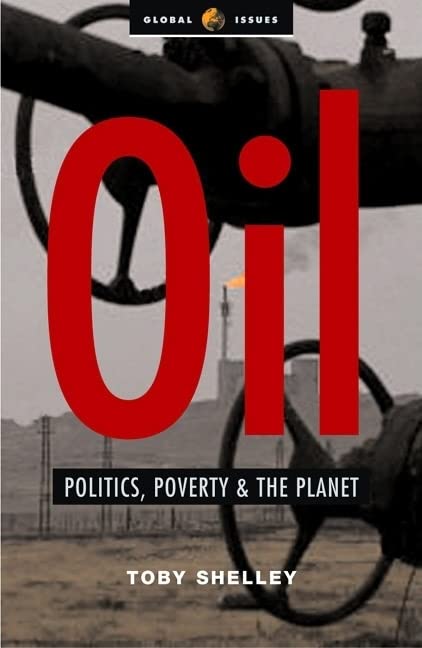 Oil: Politics, Poverty and the Planet by Toby Shelley

Access to oil and natural gas, and their prices, are hugely important axes of geo-political strategy and global economic prospects and have been for a century. This book, written by a Financial Times journalist who has long covered the energy sector, provides readers with the essential information they need for understanding the shifting structure of the global oil and gas economy: where the reserves lie, who produces what, trade patterns, consumption trends, prices.

The book highlights political and social issues in the global energy sector -- the domestic inequality, civil conflict and widespread poverty that dependence on oil exports inflicts on developing countries and the strategies of wealthy countries (especially the United States) to control oil-rich regions.

Energy demand is on a strong upward trend. The reality of the environmental damage caused by fossil fuels cannot be doubted. What are likely to be the human consequences: changing disease vectors, unprecedented flooding, mass migration? And what is to be done both in the wealthy countries where consumerism drives increasing growth in demand and in developing countries aiming to grow their economies faster? Are alternative energy sources a panacea? Or will the much vaunted hydrogen economy still be based on oil, natural gas and coal?

Here is a book that addresses what is perhaps the most pervasive and destabilizing of the issues facing humanity.

Toby Shelley has reported from many countries in the Middle East, North Africa and sub-Saharan Africa over the course of twenty years as a journalist. He works for the Financial Times. Previously he was regional energy news editor for Dow Jones Newswires. He contributes regularly to Middle East International. His most recent book is Endgame in the Western Sahara: What Future for Africa's Last Colony? (Zed Books, 2004).

GOR004321540
Oil: Politics, Poverty and the Planet by Toby Shelley
Toby Shelley
Global Issues
Used - Good
Paperback
Zed Books Ltd
2005-04-30
240
1842775219
9781842775219
N/A
Book picture is for illustrative purposes only, actual binding, cover or edition may vary.
This is a used book - there is no escaping the fact it has been read by someone else and it will show signs of wear and previous use. Overall we expect it to be in very good condition, but if you are not entirely satisfied please get in touch with us.