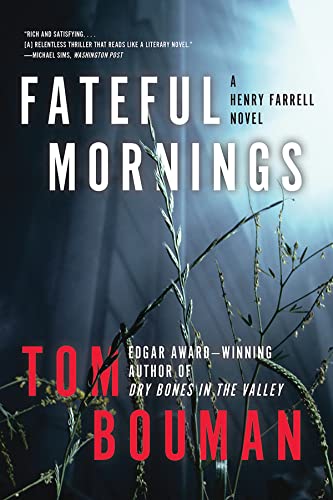 "A terrific writer. Definitely one to keep an eye on."-Dennis Lehane

In Wild Thyme, Pennsylvania, summer has brought Officer Henry Farrell nothing but trouble. Heroin has arrived with a surge in crime. When local carpenter Kevin O'Keeffe admits that he shot a man and that his girlfriend, Penny, is missing, the search leads the small-town cop to an industrial vice district across state lines that has already ensnared more than one of his neighbors. With the patience of a hunter, Farrell ventures into a world of shadow beyond the fields and forests of home.

Fateful Mornings is the second book in the Henry Farrell series. Tom Bouman's Officer Farrell returns in The Bramble and the Rose.

"Fateful Mornings is a haunting dissection of the broken heart of America." -- Val McDermid
"Leisurely but hard-edged.... Officer Farrell, who thinks a lot but speaks so little... proves to be excellent company." -- Tom Nolan - Wall Street Journal
"Fateful Mornings is terrific reading, a keeper that you'll want to read at least twice and maybe even more frequently. You'll wish that everything was this good." -- Joe Hartlaub - Book Reporter
"You would be hard-pressed to find a finer new series than Tom Bouman's Henry Farrell novels because of the complexity of the plots or the richness of the characters, but what it really comes down to is just damn good writing." -- Craig Johnson, author of the Walt Longmire novels, the basis for the Netflix series Longmire
"Henry Farrell casts an eye both dry and weary. What he sees is a people no less troubled than their rust-belt landscape: drug addicts and drug dealers, drunks and grifters. In Wild Thyme, vice and virtue seem locked in an epic bar brawl of astonishingly high stakes, where the losers keep their money and the winners keep their souls." -- Thomas H. Cook, Edgar Award-winning author of The Chatham School Affair
"Fateful Mornings is that long sought-after gem, the place where the literary meets the crime novel in beautiful symmetry. Henry Farrell is an existential everyman, as clueless as the rest of us about life's meaning, and his so very human stumbling in search of the elusive truths is one of the many beauties of this fine novel." -- William Kent Krueger, New York Times best-selling author of the Cork O'Connor series and Ordinary Grace
"My father always said that you can judge people by the way they keep their tools: clean and sharp or soiled and soft. Tom Bouman's tools-the words he uses to make Fateful Mornings-cut straight and true, in this riveting mystery about a good man caught in the ruined Eden of rural America." -- Julia Keller, Pulitzer Prize-winning author of Sorrow Road
"An uncommonly intelligent whodunit, haunted by the presence of an unforgettable villain who slinks through the pages with the lubricious evil of Cape Fear's Max Cady. With meditations on folk music, ornithology, and the art of timber-framing, Fateful Mornings is the kind of novel that feels more like a porch-sitting conversation with an old friend. Tom Bouman is my new favorite mystery writer." -- Nickolas Butler, internationally best-selling author of Shotgun Lovesongs, Beneath the Bonfire, and The Hearts of Men
"More than a mystery, Fateful Mornings is a portrait of the rusted pocket of northeastern Pennsylvania that Henry Farrell calls home. Bouman's tender portrait of a widower remaking his life infuses his crime fiction with a level of intimacy that is both rare and winning. I was happy to ride shotgun with Henry Farrell again." -- Attica Locke, author of Black Water Rising and The Cutting Season
"Fateful Mornings unfolds in a less hectic and more novelistic manner than many police-procedurals, leaving space for meditations on natural history... investigatory digressions and dead ends, lucky chances, and the vicissitudes of the lonely narrator's love-life.... Officer Farrell... proves to be excellent company." -- Wall Street Journal
Tom Bouman is the author of Fateful Mornings and Dry Bones in the Valley, which won the Edgar Award for Best First Novel and a Los Angeles Times Book Prize. He lives in upstate New York.
GOR010868926
Fateful Mornings: A Henry Farrell Novel by Tom Bouman
Tom Bouman
The Henry Farrell Series
Used - Very Good
Paperback
WW Norton & Co
2018-07-03
368
039335590X
9780393355901
N/A
Book picture is for illustrative purposes only, actual binding, cover or edition may vary.
This is a used book - there is no escaping the fact it has been read by someone else and it will show signs of wear and previous use. Overall we expect it to be in very good condition, but if you are not entirely satisfied please get in touch with us
Trustpilot