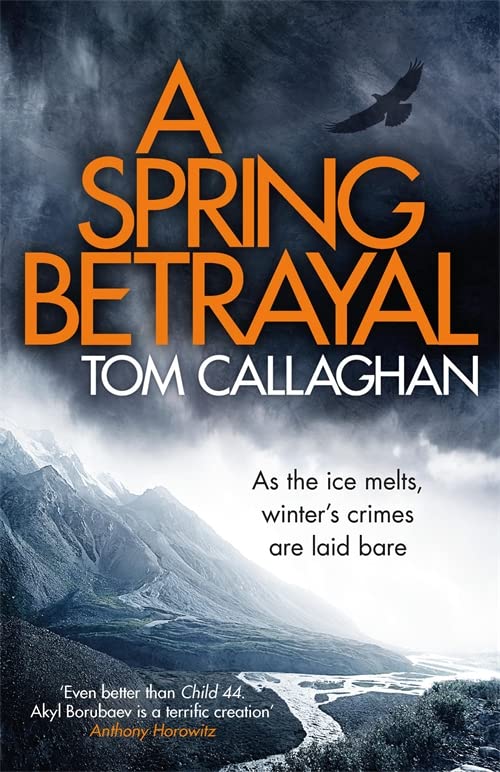 A Spring Betrayal
by Tom Callaghan

'Even better than Child 44. Akyl Borubaev is a terrific creation' Anthony Horowitz

WE UNCOVERED THE LAST OF THE BODIES IN THE RED HOUR BEFORE DUSK, AS THE SUN STAINED THE SNOWCAPS OF THE TIAN SHAN MOUNTAINS THE COLOUR OF DRIED BLOOD. . .

Inspector Akyl Borubaev of Bishkek Murder Squad has been exiled to the far corner of Kyrgyzstan, but death still haunts him at every turn. Borubaev soon finds himself caught up in a mysterious and gruesome new case: several children's bodies have been found buried together - all tagged with name bands. In his search for the truth behind the brutal killings, Borubaev hits a wall of silence, with no one to turn to outside his sometime lover, the beautiful undercover agent Saltanat Umarova.

When Borubaev himself is framed, accused of involvement in the production of blood-soaked child pornography, it looks as though things couldn't get any worse. With the investigation at a dangerous standstill, Borubaev sets out to save his own integrity, and to deliver his own savage justice on behalf of the many dead who can't speak for themselves . . .

'Just keeps getting better . . . buy the whole series right away' Peter Robinson, No.1 bestselling author of Sleeping in the Ground

'Storytelling of the highest quality . . . Introduces a detective it is impossible not to believe in. Callaghan is a new voice to be welcomed' Daily Mail

Even better than Child 44. Akyl Borubaev is a terrific creation * Anthony Horowitz *
Just keeps getting better . . . buy the whole series right away * Peter Robinson, author of the bestselling DCI Banks series *
Storytelling of the highest quality . . . Introduces a detective it is impossible not to believe in. Callaghan is a new voice to be welcomed * Daily Mail *
Not since Child 44 have I read something that's left such a memorable impression * Sebastian Fitzek on A Killing Winter *
This is a thrilling, intense debut from a powerfully descriptive writer * The Daily Express *
[Tom Callaghan's] gloomy atmospheric portrait convinces and he writes with style and panache . . . A lively story and a riveting glimpse of an unknown society * The Times *
A Killing Winter is a brilliant debut, and an early contender for one of my top reads of the year * Raven Crime Reads *
Unforgettable * The Sunday Times *
His [Tom Callaghan's] descriptions are wonderful - sickeningly so in fact * The Bookbag *
It's brutal but not cynical; you feel it. It's a hugely impressive debut; atmospheric and stirring * Killing Time Crime *
Callaghan is a hell of a writer, with a tremendous sense of pace and an arch ear for juicy dialogue, and the pages fly by. * Crime Thriller Fella *
This is a wonderful book . . . the narrative is savage yet at the same time beautifully crafted . . . A Killing Winter satisfies on so many levels * Milo Rambles *
Ticks all the boxes of plot, setting and character. * The Crime Warp *
The story and writing sustained me right through to the killer twist ending * Book Bonding *
Fast-paced and enthralling * Written by Sime *
The denouement is suitably surprising and satisfactory. I got there breathless and tense * Thriller books journal *
Tom Callaghan is a name to watch * Promoting Crime Fiction *

Born in the north of England, Tom Callaghan was educated at theUniversity of York and Vassar College, USA. An inveterate traveller, he divideshis time between London, Prague, Dubai and Bishkek.

GOR008752578
A Spring Betrayal: An Inspector Akyl Borubaev Thriller (2) by Tom Callaghan
Tom Callaghan
An Inspector Akyl Borubaev Thriller
Used - Very Good
Paperback
Quercus Publishing
2017-05-04
336
1784292435
9781784292430
N/A
Book picture is for illustrative purposes only, actual binding, cover or edition may vary.
This is a used book - there is no escaping the fact it has been read by someone else and it will show signs of wear and previous use. Overall we expect it to be in very good condition, but if you are not entirely satisfied please get in touch with us.