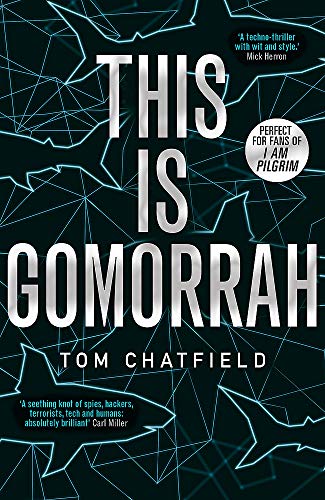 This is Gomorrah
by Tom Chatfield

Used Price
$19.99
inc. GST
Free Shipping in Australia
Set in the technological underbelly of the 21st century, and taking the reader between London, Berlin, Athens and Los Angeles, THIS IS GOMORRAH is an ultra-modern thriller for fans of I AM PILGRIM and James Swallow.
Very Good

This is Gomorrah Summary

This is Gomorrah: the dark web threatens one innocent man by Tom Chatfield

THIS IS HELL.
The war on terror is no longer just fought on the ground. In Syria, Islamic Republic recruits are now learning to spread fear online. But they've left a clue to their deadly next move . . .

THIS IS THE MAN WHO CAN STOP THEM.
Lonesome hacker Azi Bello is nobody's idea of a hero. Except his skills have caught the attention of a mysterious espionage unit, who think he might have what it takes to stop this evil force. Sent on a mission which could cost him his life, Azi's ultimate destination is Gomorrah.

But can he make it out alive?

Praise for THIS IS GOMORRAH:

'A techno-thriller with wit and style' Mick Herron, bestselling author of Slow Horses

What readers have said about THIS IS GOMORRAH:

'I am lost for words to describe just how spectacular this book is . . . a must read'

'This is one of the best books I have read so far this year, a clever rollercoaster of a ride and I cannot wait for the next book in this series'

'There was no way that I could predict some of the wild directions this thriller took. Totally exhilarating'

This is Gomorrah Reviews

Chatfield pulls off a beguiling blend of riveting hacker lore, sharp dialogue and inventive action scenes * The Sunday Times *
A techno-thriller with wit and style. It reminded me of Chris Brookmyre, and praise doesn't come higher than that. -- Mick Herron
Gripping, intelligent and stylish. -- Sophie Hannah
Punchy, powerful and one hell of a wild ride, this is thriller writing at its absolute best -- Chris Whitaker
A sharp thriller that takes us deep into the digital underworld. Taut and tense . . . a well told, fast-paced story packed with contemporary relevance -- Adam Hamdy
A tight, fast-moving thriller. Like Three Days of the Condor for the internet age -- Mason Cross
If espionage today is all about hack and counter-hack, which it clearly is, then Tom Chatfield has just written the classic twenty-first century spy thriller. Move over James Bond: Azi Bello has hacked your smartphone and he owns you. -- Michael Ridpath
Fast and funny, dangerous and blinding-bright . . . an adrenaline-rush of a book for our menacing times -- Paul Cody
a seething knot of spies, hackers, terrorists, tech and humans: absolutely brilliant. -- Carl Miller
Accomplished and chilling . . . Chatfield writes with real skill, intelligence, and, despite the grim story, humor * Publishers Weekly *
I read this from behind the sofa... I can't think of a better way to learn about hacking and the dark web . . . Halfway between a TED talk and rollercoaster! -- Philippa Perry
A rollicking good cyber thriller - one to make William Gibson proud -- Madison Smartt Bell
A swift and spiky view of modern espionage -- James Swallow
Fans of THE PRESIDENT IS MISSING won't want to miss this one -- James Patterson

Dr Tom Chatfield is a writer, broadcaster and tech philosopher. His seven books exploring contemporary culture have been published in over two dozen languages. He is currently technology and media advisor at Agathos LLP; a Non Executive Director at the Authors' Licensing and Collecting Society and at the Copyright Licensing Agency; a faculty member at London's School of Life; a Master's Committee member at the Economics Research Council; guest faculty member at the Said Business School, Oxford; and a senior expert at the Global Governance Institute. As a speaker and broadcaster, Tom's appearances include TED Global and the Cannes Lions Festival; authors@Google; the World Congress on Information Technology; Science Foo Camp; Intelligence Squared and the Houses of Parliament. A launch columnist for the BBC's worldwide technology site, BBC Future, Tom writes and commentate widely in the international media, as well as guest lecturing at universities in the UK and Europe. He is a regular on BBC radio and television, and broadcasts around the world. THIS IS GOMORRAH is his first novel.

GOR009847392
This is Gomorrah: the dark web threatens one innocent man by Tom Chatfield
Tom Chatfield
Used - Very Good
Hardback
Hodder & Stoughton
2019-07-11
288
1473681375
9781473681378
N/A
Book picture is for illustrative purposes only, actual binding, cover or edition may vary.
This is a used book - there is no escaping the fact it has been read by someone else and it will show signs of wear and previous use. Overall we expect it to be in very good condition, but if you are not entirely satisfied please get in touch with us.