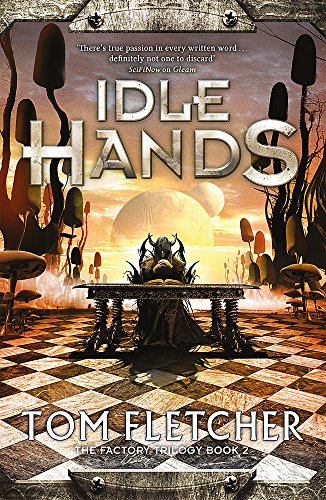 Can Wild Alan unite the Discard against the tyranny of the Pyramid? Idle Hands is an ancient disease that once tore through the Discard, and if Wild Alan doesn't find a way into the Black Pyramid to administer the cure to his son, Billy, it will soon be stalking Gleam once again

Can Wild Alan unite the Discard against the tyranny of the Pyramid?

Idle Hands is an ancient disease that once tore through the Discard, and if Wild Alan doesn't find a way into the Black Pyramid to administer the cure to his son, Billy, it will soon be stalking Gleam once again. Even with Bloody Nora's help, there's only one way in - and that's through the Sump, which was sealed long ago to contain the horrors within.

And for Alan, the Black Pyramid will be even more dangerous. Thanks to the disease, the Pyramidders' fear and loathing of the Discard is reaching fever-pitch - and Alan is the most well-known Discarder of all.

Bloody Nora has her own agenda. All the information she needs to complete her people's Great Work is hidden in the Pyramid - but just by being there, she is violating a centuries-old treaty between the Pyramid and the Mapmakers, which could spark conflict between the two greatest powers that Gleam knows.

'A wild ride through a world rooted in bizarre and unfathomable traditions . . . I quickly fell in love with this book' - Bibliosanctum on Gleam

There's true passion in every written word . . . With such deep characters and a storyline that promises more in its sequels, Gleam is definitely not one to discard. 4/5 * SciFiNow *
Gleam's combination of dystopia, mythic quest, music and squishy monsters is hugely entertaining. Fletcher's distinctive prose - alternating barogue description and brutal action - is spiced with witty dialogue and eccentric characters. 4/5 * SFX *
Absolutely one of my favourite books of the year . . . a sprawling, wild and highly engaging tale of a completely different world - one inhabited by the weird and wonderful, where dark secrets lie hidden and an eclectic and highly intriguing group set out on a quest to discover them * Liz Loves Books on Gleam *
Gleam is an astonishing novel . . . A book of the year for sure. -- For Winter Nights
Gleam is a very accomplished novel. The tapestry of the Alan's world is extremely rich and is filled with immaculately planned details. The story flows nicely and the last hundred pages or so only made me want to read more. In short, it'll be a long wait for the sequel! * Upcoming4me *
A wild ride through a world rooted in bizarre and unfathomable traditions . . . Gleam is simply beyond fascinating . . . I quickly fell in love with this book. * Bibliosanctum *
Idle Hands keeps up the momentum built up in Gleam and goes on to deliver an exciting second instalment of Fletcher's dystopian vision . . . An imaginative and exciting sequel * The Horror Hothouse *
Tom Fletcher has published short stories, as well as three standalone novels with Quercus and Jo Fletcher Books, The Leaping, The Thing on the Shore and The Ravenglass Eye. The Factory Trilogy is his first Fantasy series. He lives near Manchester with his wife and son.
GOR008419193
9781848662568
1848662564
Idle Hands: The Factory Trilogy Book 2 by Tom Fletcher
Tom Fletcher
factory trilogy
Used - Like New
Hardback
Quercus Publishing
2017-07-25
400
N/A
Book picture is for illustrative purposes only, actual binding, cover or edition may vary.
The book has been read, but looks new. The book cover has no visible wear, and the dust jacket is included if applicable. No missing or damaged pages, no tears, possible very minimal creasing, no underlining or highlighting of text, and no writing in the margins
Trustpilot