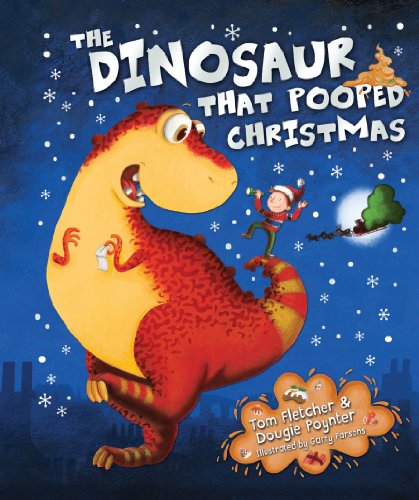 The Dinosaur That Pooped Christmas!
by Tom Fletcher

In Stock
$18,99
inc. GST
This mini edition of the best-selling Christmas picture book is the perfect stocking-filler. Danny wants everything for Christmas.But what he gets is a dinosaur, a very hungry dinosaur.Danny's new dino eats up all of Christmas, but as we all know, what goes in must come out . . .Danny is about to have the most EXPLOSIVE Christmas of his life!
Like New Very Good Good
Only 1 left

The Dinosaur That Pooped Christmas! Summary

The Dinosaur That Pooped Christmas! by Tom Fletcher

This mini edition of the best-selling Christmas picture book is the perfect stocking-filler. Danny wants everything for Christmas. But what he gets is a dinosaur, a very hungry dinosaur. Danny's new dino eats up all of Christmas, but as we all know, what goes in must come out . . . Danny is about to have the most EXPLOSIVE Christmas of his life! There's poop, presents and prehistoric creatures in this festive feast!

The Dinosaur That Pooped Christmas! Reviews

"The puritan in me says this is not something we should encourage, surely, toilet humour doesn't have a place in children's literature, does it? Then I remember my children's favourite TV show from the 1980s, the wolves, who farted and belched and made everyone, including me and Wendy, have hysterics. Toilet humour is harmless, and when it involved dinosaurs, there's no harm done, is there? This will make you laugh, and the illustrations are terrific, so what can go wrong? I'll put the puritan in me back in the sideboard and save it for something more worthy. This is brilliant!" * Books Monthly *
"Expect this naughty rhyming story to be a seasonal favourite" * The Bookseller *
"The book, which is very reminiscent of Dr Seuss . . . is a lovely life lesson and deliciously naughty toilet-humour that will have young readers squealing in delight" * Madhouse Family reviews *
"Great for little people" * Burnley Express *
"They have masterminded a work of genius." -- Philip Stone * The Bookseller *

Tom Fletcher (Author) Tom Fletcher is one of the UK's bestselling authors for children. He is the creator of The Christmasaurus, which was the biggest debut middle-grade novel of 2016, as well as being one half of the duo behind the Dinosaur That Pooped picture book series, which has sold over a million copies. Tom is also a musician, Guinness World Record holder and vlogger. His YouTube channel has had almost 100 million video views and 630 thousand subscribers. Tom's books have been translated into thirty-two languages and his most recent is called There's A Dragon in Your Book.Dougie Poynter (Author) Dougie Poynter has been obsessed with dinosaurs ever since visiting the Natural History Museum when he was about three. He is passionate about the natural world and a keen conservationist, working with charities such as WWF and Greenpeace to get harmful products banned and to clean up the planet. Dougie wrote songs together with Tom Fletcher for years in bands McFly and McBusted; they now write their bestselling Dinosaur that Pooped books in the same way that they write their song lyrics. The books have sold over a million copies!Garry Parsons (Illustrator) Garry Parsons is an award-winning illustrator of books for children, including the bestselling The Dinosaur That Pooped series. Garry's illustrations have accompanied the words of many prestigious picture-book authors, including Kes Gray, Ian Whybrow and Peter Bently. He has also illustrated the popular fiction series The Dragonsitter by Josh Lacey and the space adventure series George's Secret Key to the Universe by Lucy and Stephen Hawking for slightly older readers. Garry lives in London with his young family and old dog.

GOR010522710
The Dinosaur That Pooped Christmas! by Tom Fletcher
Tom Fletcher
The Dinosaur That Pooped
Used - Like New
Hardback
Random House Children's Publishers UK
2013-09-26
32
0857540122
9780857540126
N/A
Book picture is for illustrative purposes only, actual binding, cover or edition may vary.
This is a used book - there is no escaping the fact it has been read by someone else and it will show signs of wear and previous use. Overall we expect it to be in very good condition, but if you are not entirely satisfied please get in touch with us.