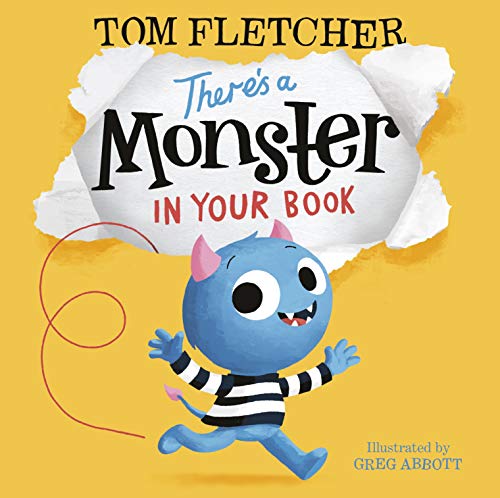 There's a Monster in Your Book by Tom Fletcher

There's a Monster in Your Book by Tom Fletcher

From the bestselling author of The Dinosaur That Pooped and The Christmasaurus, a cased board book edition of Tom Fletcher's brilliant, interactive story!

A monster has invaded the pages of this original and super-fun bedtime picture book!

Children need to read aloud and follow the interactive instructions to help free the pesky monster by tilting, spinning and shaking their book.

After all that fun, there is a calming wind down end- perfect to send your own little monster off to sleep.

Perfect for little fans of The Very Hungry Caterpillar and Julia Donaldson.

Tom Fletcher (Author)
Tom Fletcher is one of the UK's bestselling authors for children. The Christmasaurus was the biggest debut middle-grade novel of 2016 and was shortlisted for a British Book Award, and The Creakers was a number one bestseller. Tom is also the bestselling author of the In Your Book picture book series, as well as one half of the author duo behind the Dinosaur that Pooped picture book series, which has sold over a million copies. Tom's books have been translated into thirty-three languages and counting. He is also a music-making, song-writing, guitar-playing, Guinness World Record-holding, nappy changing, galaxy-defending dad!

Greg Abbott (Illustrator)
Greg Abbott is an illustrator and designer who lives in West Sussex, England. In addition to children's books, he has created art prints, apparel, toys, greetings cards, and other merchandise. Visit him on Tumblr at gregabbott.tumblr.com.

GOR011452865
9780141376110
0141376112
There's a Monster in Your Book by Tom Fletcher
Tom Fletcher
Who's in Your Book?
Used - Well Read
Hardback
Penguin Random House Children's UK
2020-01-07
32
N/A
Book picture is for illustrative purposes only, actual binding, cover or edition may vary.
This is a used book. We do our best to provide good quality books for you to read, but there is no escaping the fact that it has been owned and read by someone else previously. Therefore it will show signs of wear and may be an ex library book
Trustpilot