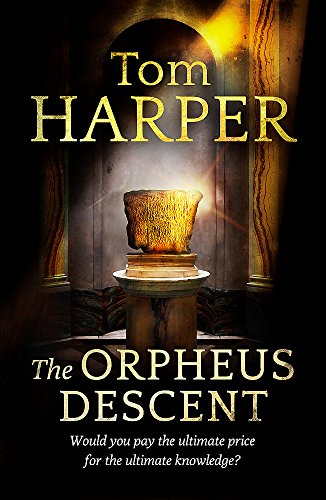 The Orpheus Descent
by Tom Harper

The Orpheus Descent by Tom Harper

I have never written down the answers to the deepest mysteries, nor will I ever...

The philosopher Plato wrote these words more than two thousand years ago, following a perilous voyage to Italy -- an experience about which he never spoke again, but from which he emerged the greatest thinker in all of human history.

Today, twelve golden tablets sit in museums around the world, each created by unknown hands and buried in ancient times, and each providing the dead with the route to the afterlife. Archaeologist Lily Barnes, working on a dig in southern Italy, has just found another.

But the thirteenth tablet is different. This tablet names the location to the mouth of hell itself.

And then Lily vanishes.

Has she walked out on her job, her marriage, and her life -- or has something more sinister happened? Her husband, Jonah, is desperate to find her. But no one can help him: not the police; not the secretive foundation that sponsored her dig; not even a circle of university friends who seem to know more than they're saying. All Jonah has is belief, and a determination to do whatever it takes to get Lily back.

But like Plato before him, Jonah will discover the journey ahead is mysterious and dark and fraught with danger.

And not everyone who travels to the hidden place where Lily has gone can return.

'Tom Harper has been writing elaborate thrillers that marry ironclad narrative skills with some of the most elegantly understated writing in the field; he's the thinking person's Dan Brown. Actually, Harper deserves the latter's success -- and more, as Harper is comfortably the better writer.' * Barry Forshaw, author of The Rough Guide to Crime Writing. *
'Harper effortlessly draws the reader into an unfamiliar time, bringing alive the characters and their motivations' * Publisher's Weekly *

Tom Harper was born in West Germany in 1977 and grew up in Germany, Belgium and America. He studied history at Lincoln College, Oxford, worked for a while in the glamorous world of pensions services, and now writes full time. He lives in York with his wife and two sons. His novels have been sold into twenty languages, from Brazil to China. In 2001 Tom Harper's debut, The Blighted Cliffs, was the runner up for the CWA Debut Dagger Award. He can be found online at www.tom-harper.co.uk.

GOR005268083
The Orpheus Descent by Tom Harper
Tom Harper
Used - Very Good
Paperback
Hodder & Stoughton General Division
2013-10-24
496
1444731378
9781444731378
N/A
Book picture is for illustrative purposes only, actual binding, cover or edition may vary.
This is a used book - there is no escaping the fact it has been read by someone else and it will show signs of wear and previous use. Overall we expect it to be in very good condition, but if you are not entirely satisfied please get in touch with us.