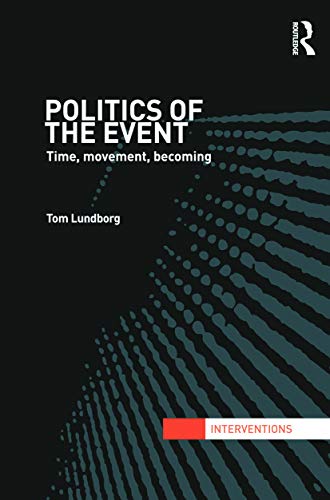 Politics of the Event by Tom Lundborg (Dalarna University, Sweden)

Despite occupying a central role and frequently being used in the study of international politics, the concept of the "event" remains in many ways unchallenged and unexplored. By combining the philosophy of Gilles Deleuze and his concept of the event with the example of 9/11 as an historical event, this book problematises the role and meaning of "events" in international politics.

Lundborg seeks to demonstrate how the historical event can be analysed as a practice of inscribing temporal borders and distinctions. Specifically he shows how this practice relies upon an ongoing process of capturing various movements - of thought, sense, experience and becoming. However the book also demonstrates how these same movements express a life and reality that elude complete capture, highlighting the potential for alternative encounters with the event, encounters that constantly threaten to undermine the limits and imaginary completeness of the historical event.

This book offers an exciting new way of thinking about the politics of encountering events, arguing that at the heart of such encounters there are always elements of uncertainty and contingency that cannot be fully resolved or fixed. It will be of great interest to students and scholars of international relations, cultural studies and history.

For some time international studies discipilnes have needed a perspicuous account and application of thinking in time - thinking the "event" a la Deleuze - as an antidote to simplistic geopolitical frames for analyzing global conflicts. Tom Lundborg's Politics of the Event fulfills that need admirably.

Tom Lundborg shows us how to think with and about Deleuze's philosophy of the event. He also offers a series of profound, disturbing and sometimes moving meditations on the 'event' of September 11, 2001. Drawing on Deleuze's, distinction between historical and 'pure' events, as well as associated concepts such as actualization, becoming and folding, this book is a challenge as well as a guide to thinking differently about events. It will be valuable to anyone with an interest in the nature of the events that punctuate our political and social life, but especially to those in the fields of politics and international relations, philosophy and social theory.

Tom Lundborg is a research fellow at the Swedish Institute of International Affairs, Sweden.

1. Introduction: the historical event and the pure event 2. Something abstract yet real: paradoxes and movements of the pure event 3. Returning, rebuilding, reimagining: actualization and counter-actualization 4. The becoming of 9/11 5. The politics of folding 6. Another politics of the event 7. Conclusion: within and beyond the limits of the historical event

NLS9780415721622
9780415721622
0415721628
Politics of the Event: Time, Movement, Becoming by Tom Lundborg (Dalarna University, Sweden)
Tom Lundborg (Dalarna University, Sweden)
New
Paperback
Taylor & Francis Ltd
2013-06-25
142
N/A
Book picture is for illustrative purposes only, actual binding, cover or edition may vary.
This is a new book - be the first to read this copy. With untouched pages and a perfect binding, your brand new copy is ready to be opened for the first time
Trustpilot