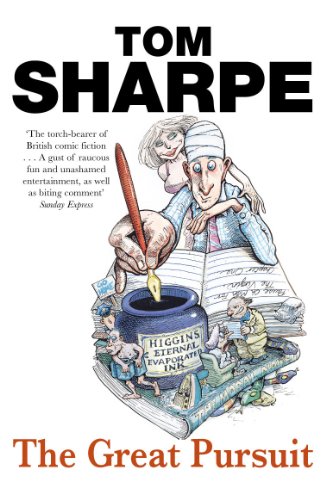 The Great Pursuit
by Tom Sharpe

In Stock
$23,99
inc. GST
One day, a manuscript for a book called Pause O Men for the Virgin arrives at the agency, together with a note from the author's solicitor, saying that the author wishes to remain anonymous and that the agency has carte blanche on how it deals with the book.
Very Good Good
Only 4 left

The Great Pursuit by Tom Sharpe

Frensic and Futtle is a small and successful literary agency. But following a successful court case by a woman who claimed to have been libeled by one of their authors, the agency rapidly loses business. One day, a manuscript for a book called Pause O Men for the Virgin arrives at the agency, together with a note from the author's solicitor, saying that the author wishes to remain anonymous and that the agency has carte blanche on how it deals with the book. The book turns out to deal with the love affair between an 80-year old woman and a 17-year old youth. The populist American publisher Hutchmeyer agrees to sign a deal to publish the book in the United States for $2 million, providing the author carries out a promotional tour of the country. Sonia and Frensic decide to use aspiring but unpublished author Peter Piper to stand in for the anonymous author. But when Piper receives a proof copy of Pause from the publisher by mistake, it takes a certain amount of persuasion and arm-twisting from Sonia Futtle to convince Piper to travel to America.

"Tom Sharpe has now turned his weapons of comic destructiveness onto that sitting target or lame duck: the literary world" * Observer *
"Mr Sharpe constructs his plot with immense care. He also, more to the point, has a nice line in lewd jokes. I understand that this sort of thing isn't to everybody's taste, but I laughed out loud" -- Guy Bellamy * Punch *
"Individual blend of robust farce and deeply cutting satire" * The Listener *
"Tom Sharpe is the funniest novelist writing today" -- Philip Howard * The Times *

GOR001200136
The Great Pursuit by Tom Sharpe
Tom Sharpe
Used - Very Good
Paperback
Cornerstone
2002-11-07
384
0099435497
9780099435495
N/A
Book picture is for illustrative purposes only, actual binding, cover or edition may vary.
This is a used book - there is no escaping the fact it has been read by someone else and it will show signs of wear and previous use. Overall we expect it to be in very good condition, but if you are not entirely satisfied please get in touch with us.