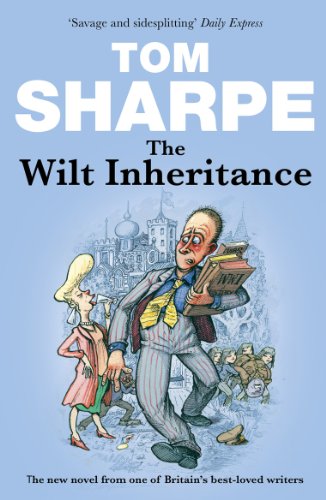 The Wilt Inheritance
by Tom Sharpe

In Stock
$14.49
+10% GST
Stuck in a job he doesn't want - but can't afford to lose - as nominal Head of the Communications Department at Fenland University, Wilt is still subject to the whims of The Powers That Be, both in and outside of work.
Very Good Good Well Read
8 in stock

Stuck in a job he doesn't want - but can't afford to lose - as nominal Head of the Communications Department at Fenland University, Wilt is still subject to the whims of The Powers That Be, both in and outside of work. The demands of his snobbish wife Eva, and the stupendous school fees of his despicable quadruplet daughters, cause him the biggest headaches... apart from the hangovers, that is. When Eva signs him up for a summer job, teaching the gun-toting idiot son of a lusty local aristocrat, Wilt is not amused. But, as circumstances unravel and the summer goes on, Wilt sees that the situation could be put to his financial advantage, as well as giving Eva some headaches of her own. With Tom Sharpe's famous dark humour in full evidence, and an explosive plot which takes its readers to places they never realised they wanted to visit, The Wilt Inheritance is another instant classic from the British master of farce.

"A major craftsman in the art of farce...vengeful, chaotic, Swiftian in his tastes, cartoonish in his extremes, and above all wild and amusing" * Observer *
"Britain's leading practitioner of black humour" * Punch *
"Tom Sharpe serves up the loudest laughs in literary comedy. He is the great post-Waugh humorist, the Wodehouse who dares plunge into the bottomless vulgarity and hysteria of our times, and a rattling good companion on a train journey" * Mail on Sunday *
"The funniest novelist writing today" * The Times *
"The best of British farce-masters is back" * Mail on Sunday *

GOR002684125
The Wilt Inheritance: (Wilt Series 5) by Tom Sharpe
Tom Sharpe
Wilt
Used - Very Good
Paperback
Cornerstone
2011-05-26
336
0099493136
9780099493136
N/A
Book picture is for illustrative purposes only, actual binding, cover or edition may vary.
This is a used book - there is no escaping the fact it has been read by someone else and it will show signs of wear and previous use. Overall we expect it to be in very good condition, but if you are not entirely satisfied please get in touch with us.