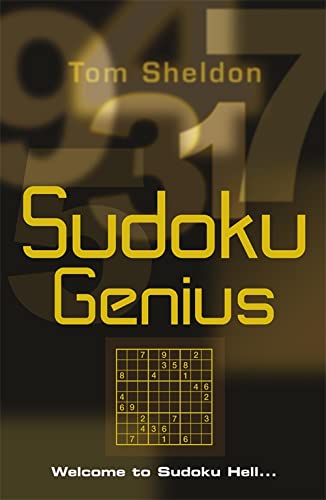 In Stock
$19.99
inc. GST
For the seasoned Sudokist who needs to be pushed to the limit, this is the first ever book of genius-level puzzles - the hardest Sudokus in the world!
Very Good
Only 4 left

Are you ready for the ultimate challenge?

To satisfy with the national obsession with Sudoku, many books have come up with variations to keep the game challenging. SUDOKU GENIUS is different. Tom Sheldon, a mathematician and researcher in bioinformatics, has used the original rules to create the first ever genius-level Sudoku: 144 of the simplest, but hardest puzzles in the world. This is a must-have for the seasoned Sudokist who has played the game, but needs to have their problem-solving capabilities pushed to the very limits.

SUDOKU GENIUS begins with a Masterclass, that discusses strategies like Last Square Left, The Force and The Pincer - then leads the reader through nine circles of Sudoku hell, from Merciless to Murderous, ending with a final puzzle that only the most hardened player will crack!

With new strategies and discussions of 'Sudoku myths', this is the ultimate test of Sudoku wits.

Tom Sheldon has degrees in Artificial Intelligence and Bioinformatics, and is working for a doctorate in Mathematical Biology, with a sideline in children's books. He lives in London with his wife and son.

GOR001794287
Sudoku Genius by Tom Sheldon
Tom Sheldon
Used - Very Good
Paperback
Hodder & Stoughton General Division
2005-11-10
288
034092134X
9780340921340
N/A
Book picture is for illustrative purposes only, actual binding, cover or edition may vary.
This is a used book - there is no escaping the fact it has been read by someone else and it will show signs of wear and previous use. Overall we expect it to be in very good condition, but if you are not entirely satisfied please get in touch with us.